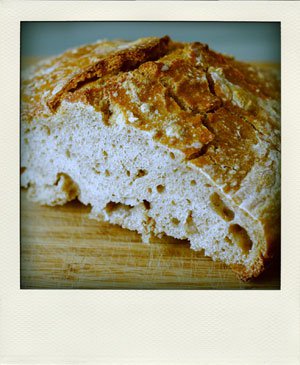 Literally translated as, “It doesn’t eat bread,” it is used to say that a thing or an action can’t hurt: it may never amount to much or be of much use, but if it costs nothing and entails no risk, why not?

It is a colloquial expression that is usually delivered with a shrug, and when spoken, the ne and the de are often swallowed, so that you will hear it as, “Ça mange pas d’pain.”

This expression dates back to the seventeenth century, when bread was the cornerstone of one’s diet, and therefore a symbol of food and sustenance in general. Consequently, if something didn’t eat any bread, i.e. if it didn’t eat into your supplies or make you any poorer, there was no reason to go without it.

This post is in honor of my very first loaf of starter bread, pictured above. You should hear more about it soon!