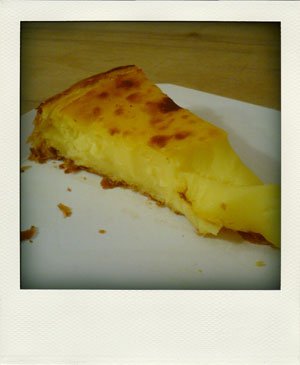 Literally translated as, “making a (whole) flan out of it,” it is a colloquial expression that means making a big deal out of something insignificant, blowing something out of proportion.

It is comparable to the English expressions, “making a mountain out of a molehill,” “making a song and dance about something,” and two edible idioms, “a storm/tempest in a teacup/teapot,” and “making a meal out of something.”

This idiom is derived from the twentieth-century expression, “En faire (tout) un plat” (making a whole dish out of it), which also evolved into, “En faire (tout) un fromage” (making a whole cheese out of it). In all three cases, the idea is that the person takes what little there is, and turns it into something much more substantial: a few scraps into a whole dish; a little milk into a whole cheese; milk, eggs, and sugar into a whole flan.

You may also come across another version of this idiom, “Il n’y a pas de quoi en faire un flan” — there isn’t enough to make a flan out of it, or it’s not worth making a fuss about.

Note: Pictured above is half of an excellent flan from the Poilâne bakery, which, incidentally, won second place in the Figaroscope’s recent flan taste test.