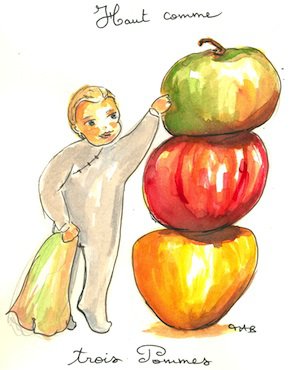 Literally translated as, “high as three apples,” it is used to point out that someone — often a child — is small or very short. I’ve seen it translated to “knee-high to a grasshopper,” although I’ve never heard that cute English expression myself.

Example: “Il était haut comme trois pommes et devait courir pour rattraper ses soeurs.” (He was high as three apples and had to run to catch up with his sisters.)

It is an early-twentieth-century expression that I love for its literalness: pile up three apples on top of one another, and you get an idea of just how small the person is (especially since the average early-twentieth-century apple was significantly smaller than what is marketed now). There is also something affectionate and sweet about comparing a child to a pile of apples, which threatens to topple any second. (It is, however, rather condescending if used for an adult.)

This idiom was used by Peyo to describe the size of his Smurfs (or rather les Schtroumpfs), although they are clearly much smaller than that in comparison to the mushrooms they inhabit, or Azraël the evil cat. This was translated to “three apples high” in the English version of the comic.

The expression is also the opening line of the song that accompanied the closing credits of Tom Sawyer, a Japanese anime that was wildly popular with French kids in the eighties. (I apologize if you have that song stuck in your head for the next two days; I’ve been there.)