Hello, I'm Clotilde! C&Z is all about fresh, simple, and colorful foods from my Paris kitchen. Learn more »
French Idioms
6 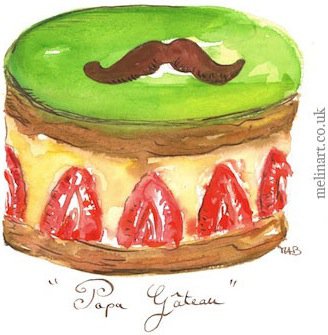 This week’s expression is, “Papa gâteau.”

Literally translated as, “cake daddy,” it is used to qualify a doting father, one who’s affectionate and good-natured, and possibly one who allows his children to wrap him around their little finger every once in a while.

This idiom, which appeared around the middle of the nineteenth century, was built as a derivation from the verb gâter, which means “to spoil”, both literally and figuratively. I will note that while spoiling a child has clear negative connotations in English, the French verb “gâter” depends on the context, and can mean either spoiling to excess, or pampering a child, but within reason.

I am fond of this expression because my own father was clearly the papa gâteau kind when my sister and I were growing up, and he also has a soft spot for cakes and sweet things, so it always seemed made for him.