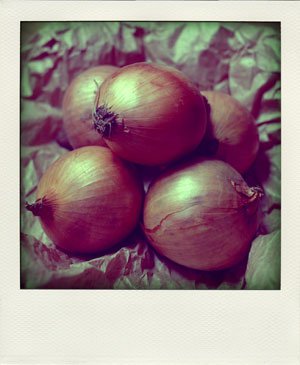 Literally translated as “taking care of one’s onions,” it means minding one’s own business, and it is used in situations when someone is meddling in someone else’s affairs*.

Example 2: “Si tu veux vraiment qu’elle s’occupe de ses oignons, il faut que tu arrêtes de l’appeler à l’aide au moindre problème.” “If you really want her to mind her own business, you have to stop calling her for help every time you have a problem.”

The onions in question are old slang** for buttocks, or testicles (can’t wait to see the search engine hits that sentence will generate). The word “onion” is seldom (if ever) used in that sense today, but the idiom lived on.

As you might infer from this explanation, it is a colloquial expression — not vulgar, because most people have forgotten what the onions really refer to, but very informal. It should be used in casual conversation only, and probably not directed at anyone you don’t know very well. In fact, it is one of those idioms that is hazardous for non-native speakers to wield, but it really depends on your fluency and comfort level, so I’ll let you be the judge of that.

Expressio offers an interesting alternate origin: in rural parts of France, women were sometimes allowed to use a section of the vegetable patch to grow onions that they could sell at the market for their own profit, rather than the household’s. The injunction to “take care of her onions” might then have been the husband’s charming way of putting his wife back in her place if he felt she was interfering with his own affairs.

Note that the core of the idiom is the onion reference, and that it can appear under several variations: “Mêle-toi de tes oignons” (meddle with your onions = mind your own business), “C’est pas tes oignons !” or “C’est pas mes oignons.”, the grammatically incorrect but spoken version of Ce ne sont pas tes/mes oignons (these are not your onions = mind your own business; these are not my onions = it’s none of my business).

* Contrary to the English equivalent, it is not used in the more positive sense of, “and here I was, minding my own business, when…”