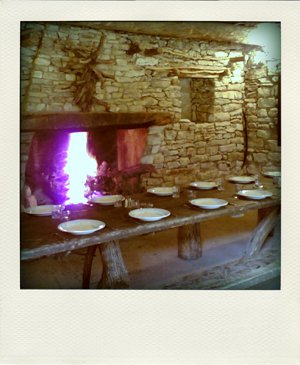 Literally translated as, “not being out of the inn*,” it means that one is tangled up in an unpleasant situation with still a ways to go, or a lot of work to do**, before one can expect to be freed from it.

It can be likened to the English idiom (not) being out of the woods, except that these woods often imply a precarious or dangerous situation, while the French auberge rather refers to one that’s burdensome and discouraging, but not necessarily unsafe.

Example 1: “Le correcteur pinaille sur chaque tournure de phrase, alors on n’est pas sorti de l’auberge.” “The copyeditor nitpicks about every turn of phrase, so we’re not out of the inn (= it’s going to take forever to go through the entire document).”

It is a colloquial expression that can also be used in a mildly mocking tone, implying that the person who’s “not out of the inn” is in fact mishandling the situation, and somehow responsible for his own difficulties.

Example 2: “Si tu cèdes à chaque fois qu’il fait un caprice, tu n’es pas sorti de l’auberge.” “If you give in every time he throws a tantrum, you’re not out of the inn (= your kid will drive you crazy).”

This idiom comes from the use of l’auberge (the inn) as a (now outdated) slang word for prison, in reference to the fact that prisoners are given room and board. Consequently, someone who isn’t out of the inn is someone who still has time to serve, i.e. tough times to go through.

* The picture above was taken inside Gianni’s farm-inn.