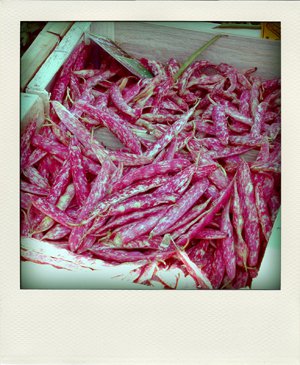 Literally translated as, “the end of the beans,” it means that the situation is disastrous, that it’s all over, and that all hope is gone.

Sounds depressing? Wait! It is in fact a colloquial expression that is most often used humorously, with a measure of irony. It may refer to 1) a situation that really is serious, but of which the speaker is trying to make light, 2) a situation that seems terrible in the heat of the moment, but isn’t that significant in the grand scheme of things, or 3) a trivial situation, the importance of which the speaker wants to exaggerate for comic effect.

Example: “Si on perd ce client, c’est la fin des haricots !” “If we lose this client, it’s the end of the beans!” (This exemplifies usage 1 or 2, depending on how much you depend on the client.)

This expression is fairly recent — it appeared in the early twentieth century — and it refers to the idea of beans as a cheap, filling, and plentiful food that was dried and put aside for times of scarcity, but held in low regard from a gustatory point of view. Consequently, when all your food supplies had been used up, and you were eating the last of even the beans, it meant that you were in a precarious position indeed.

Pictured above are fresh haricots coco roses, or pink coco beans, known in English as borlotti or cranberry beans, as spotted at the Gerardmer greenmarket a few summers ago.