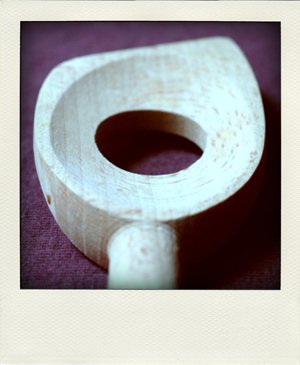 Literally translated as, “not going at it with the back of the spoon,” it is a colloquial expression that means acting bluntly and deliberately, without restraint or moderation. It is often used in the context of interpersonal relationships, and especially when someone is particularly plain-spoken about an issue (equivalent then to “not mincing one’s words”).

Note: the French word for spoon can be spelled cuiller or cuillère; both spellings are correct. One should probably choose a spelling and stick to it for the sake of consistency, and when I stop to think about it I prefer the former, but I seem to go back and forth between the two in my writing.

Example: “Tu as lu sa critique du dernier film des frères Coen ? Il n’y va pas avec le dos de la cuiller !” “Did you read his review of the latest Coen brothers movie? He doesn’t go at it with the back of the spoon!”

This idiom appeared in the early nineteenth century*. It is a puzzling one, and the explanation suggested here and there revolves around how inefficient it would be to eat soup with the spoon turned concave side down, that is to say with the back of the spoon.

This explanation seems shaky to me (how is it blunt and deliberate to use a spoon the way it was intended?), and after a little research, I developed a theory of my own: I think the idiom may have originated among soldiers. Army food supplies were limited, so when the daily soup was served, soldiers had to make sure the person serving it wasn’t scrimping, and that they were served full ladles. If they weren’t, they would joke that they’d been served with the back of the spoon, a technique that would indeed yield very little soup. Conversely, not being served with the back of the spoon would mean that the server had been much more deliberate with the serving.

My theory is based on this excerpt in an 1894 issue of the Revue Bleue, which says “et qu’on ne les sert pas, comme disent les troupiers, avec le dos de la cuiller” (and that they’re not served, as soldiers say, with the back of the spoon).

[Pictured above is a risotto spoon. The hole helps prevent the rice from pooling in the cup of the spoon as you stir.]

* The earliest use I’ve found is in a 1809 letter written by Félicité Robert de Lamennais.