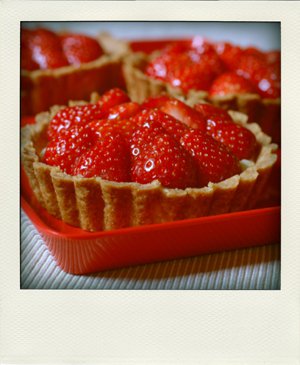 Approximately translated as, “it’s not pie*,” it means that something is tricky, difficult to do or to handle. Because it is a colloquial expression that is mostly spoken, it is usually elided to, “C’est pas de la tarte.”

* Une tarte should really be translated as a tart, i.e. a pie with no top crust, but then the translated phrase, “it’s not tart,” sounded too ambiguous for quick understanding (tart=pie or tart=sour?).

Although I wasn’t able to find a definitive source to confirm this, it seems to be a fairly recent expression, appearing sometime in the second half of the twentieth century.

If you want to express the affirmative, that something is very easy, you should use the sibling expression, C’est du gâteau, it’s cake. (Who said French was difficult?)

Naturally, these two expressions bring to mind their near twins in English, “(as) easy as pie” and “a piece of cake,” which appeared earlier (respectively in the late ninetieth century and in the late thirties); it is possible that the French expressions were inspired by them.

But the real question is, why associate the idea of ease with baked goods? Granted, tarts and cakes are not the easiest things one can make in a kitchen, but these idioms are likely referring to the eating of said baked goods, which few people find difficult to do.

Photo note: Pictured above are strawberry tartlets made from my mother’s recipe, which is included in my cookbook (in the British and French editions as well).