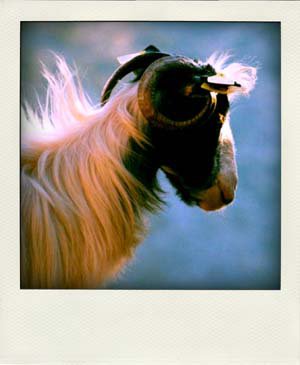 Translated as, “Accommodating* the goat and the cabbage,” it means trying to please both sides in a situation where the two parties are in fact irreconcilable. It is equivalent to the English expression, “running with the hare and hunting with the hounds,” but it is a lot more common.

It is often used when talking about politics and diplomacy, and in some cases it takes on a slightly negative connotation: it may be implied that the person who’s trying to keep everyone happy is in fact letting the situation drag on, when perhaps a resolute/courageous decision one way or the other would settle the matter more efficiently.

Example: “A force d’essayer de ménager la chèvre et le chou, le maire s’est mis tout le monde à dos.” “The mayor has been trying for so long to accommodate the goat and the cabbage that he’s turned everyone against him.”

The contention between the goat and the cabbage is clear: the goat would rather like to munch on the cabbage, while the cabbage would prefer to be left alone, thank you.

This idiom has been a part of the French language — with slight variations — since the thirteenth century, and it is based on a very old and popular version of the river-crossing riddle that involves a wolf, a goat, and a cabbage.

The riddle goes like this: a man is standing on the bank of a river. He has with him a wolf, a goat, and a cabbage, and he would like to get them all on the other side. He has a small boat, on which he can only embark two passengers at a time (for the purpose of this riddle, the cabbage counts as a passenger). The thing is, the man knows that if he leaves the goat alone with the cabbage, the goat will think it’s lunch. Likewise, if the wolf and the goat are left to their own devices, the wolf will devour the goat. So, what’s the man to do in order to get everyone across, safe and sound?***

* The French verb ménager is in fact difficult to translate. It can mean different things depending on the context, but here, it means treating someone with consideration, sparing him any upset or inconvenience. “Accommodating” is therefore not an exact equivalent, but it’s the best compromise I could find to get the meaning of the phrase across.

** In truth, I cannot attest to the goat’s taste for cabbage — it appears that cabbage is seldom grown in regions where goats thrive and vice versa — but when we were little, my sister and I would feed the goats at the Jardin d’Acclimatation lettuce cores that my mother saved for just this purpose. The little ones would go crazy over them, while my father distracted the voracious buck. Nowadays you’re no longer allowed to feed the animals, but I think of those goats every time I peel a lettuce to its core.