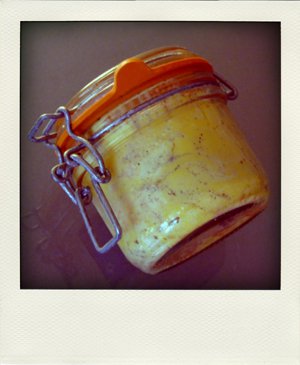 Literally translated as, “Being in the pâté,” it means feeling drowsy and out of it, usually in the morning after too much partying and/or not enough sleeping. It is a slang expression, not vulgar but definitely not elegant, so I don’t really suggest you use it — slang is the trickiest thing to get right in a foreign language — but I offer it here in case it comes up in conversation.

Example: “Elle était tellement dans le pâté qu’elle est partie en oubliant son téléphone.” “She was so badly in the pâté that she left and forgot her phone.”

This idiom is a late twentieth century riff on the older slang idioms être dans le cirage (being in polish) and être dans le coaltar* (being in coal tar), which both drew on the idea that workers who had to spend the day breathing in polish or tar fumes in badly ventilated environments quickly felt dazed and foggy-minded.

But one can also understand these idioms as likening the feeling of drowsiness to being plunged in a thick, paste-like substance, which would certainly feel uncomfortable and slow down your movements, and it is this second interpretation that gave way to the modern pâté variation.