Hello, I'm Clotilde! C&Z is all about fresh, simple, and colorful foods from my Paris kitchen. Learn more »
Shops & Markets
37 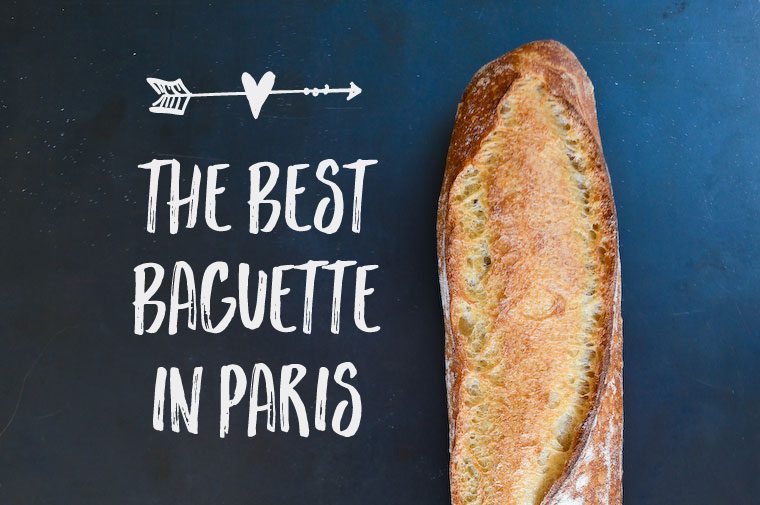 The official Meilleure Baguette de Paris competition was held last Thursday, and the 2017 winner of the Best Baguette in Paris award is (drumroll please) Sami Bouattour from Boulangerie Brun, a bakery that’s at 193 rue de Tolbiac in the 13th arrondissement (métro Tolbiac).

The competition is held every year, and it is organized by the Mairie de Paris, the mayor’s office, to spread the word about Paris as a city of fabulous bread — which it no doubt is — and to foster a healthy sense of competition between the boulangers, who strive to improve their craft in the hopes of winning that coveted distinction. 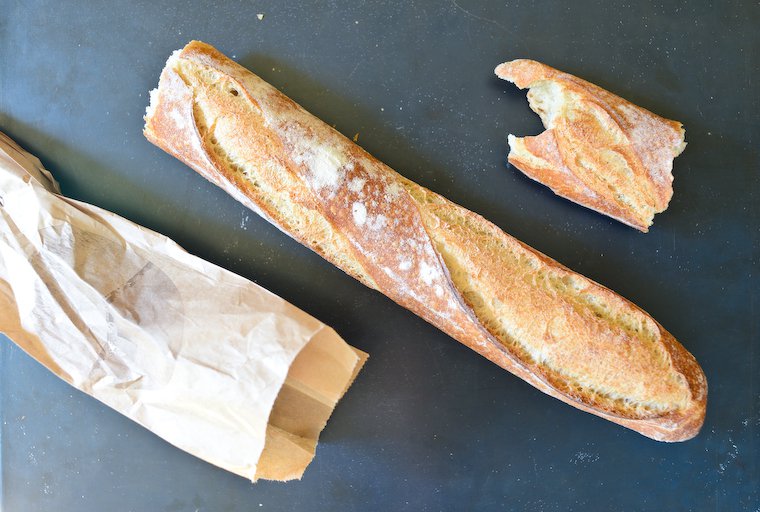 How is the Best Baguette in Paris prize awarded?

The competition is held over a single day. The bakers bring in their baguettes in the morning, and the jury spends the day grading them (anonymously) for appearance, quality of the baking, smell, and flavor. About 200 bakers enter the competition every year.

The 14-person jury is made up of other bakers, chefs, journalists, and also individuals who can put their name in and hope to be selected to participate. (It sounds like fun but it is a lot of bread to taste! Your senses and your brain get fatigued quickly when it’s not your profession. But a once-in-a-lifetime experience for sure.)

At the end of the day, the names of the top baguette makers are announced.

What’s in it for the baker?

For the lucky winner, the prize is threefold: The Baguette ordinaire, costing less than one euro, is made with quick-rising yeast and low-cost white flour. It is fine for sandwiches, but doesn’t offer much in the way of flavor complexity, and goes stale within a few hours.

The Baguette de tradition française, on the other hand, is made according to rules established by an official decree voted in the early nineties. These baguettes must be prepared with just flour, salt, and water — excluding any kind of additive or preservative — and leavened with a mix of yeast and natural starter. They can never be frozen, and are typically the result of a slow fermentation that allows the development of many more flavor compounds.

To buy one of those, simply order “Une tradition, s’il vous plaît !” 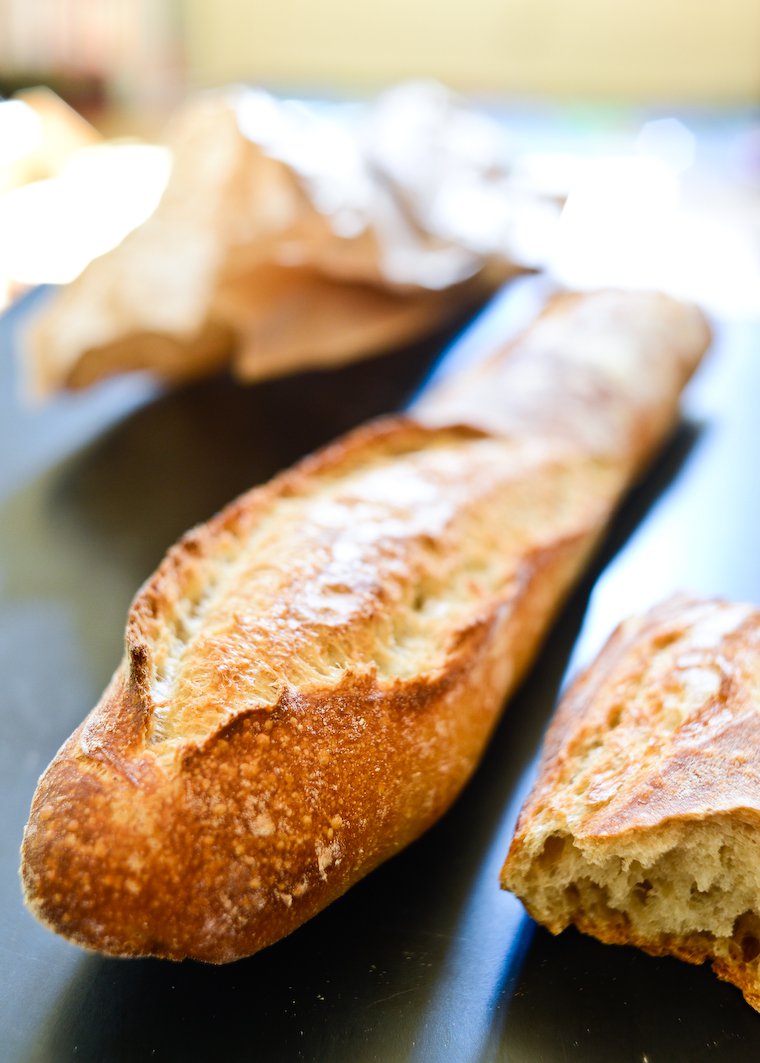 Beyond the ordinaire and the tradition, individual bakeries will create their own specialty baguettes: garnished with seeds, dusted with cornmeal, spiked with rye flour, or even colored black with squid ink.

What are the markers of a superior traditional French baguette?

The crust should be nicely browned: in baking, color is flavor, and if you underbake bread you miss out on the flavors that develop when the flour caramelizes in those last few minutes of baking.

The crust (la croûte) should be crisp, and it should “chirp” when you press it close to your ear.

The ridges on the top, called grignes, should be sharply defined and clearly raised. 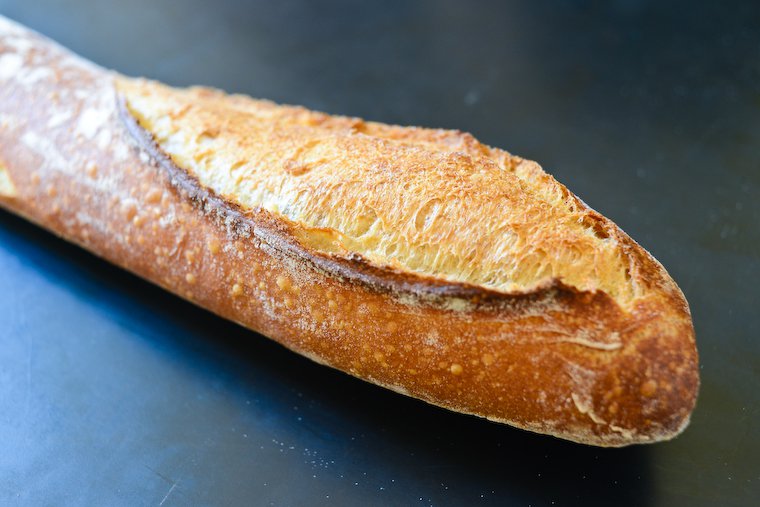 The underside of the baguette should be flat and greyish, which indicates it was baked directly on the stone floor of an oven. This is the marker of an artisanal baguette, because it takes a trained artisan to do it this way. A dotted or honeycomb pattern indicates it was baked in a mold or on a conveyer belt, which are signs of a semi-industrial or industrial operation. 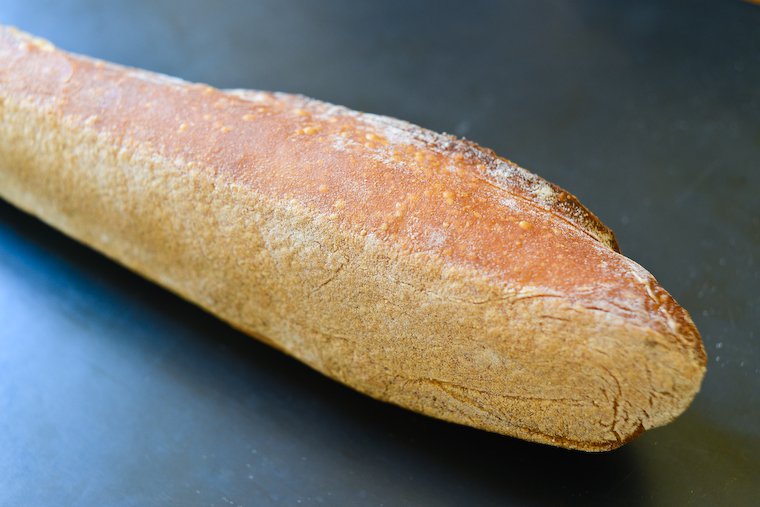 When you tear off the tip of the baguette (called le quignon or le coude, the elbow), the crumb (la mie) inside should be ivory white, open, with uneven air pockets and an irresistibly fresh smell, milky and floral, that makes your mouth water. 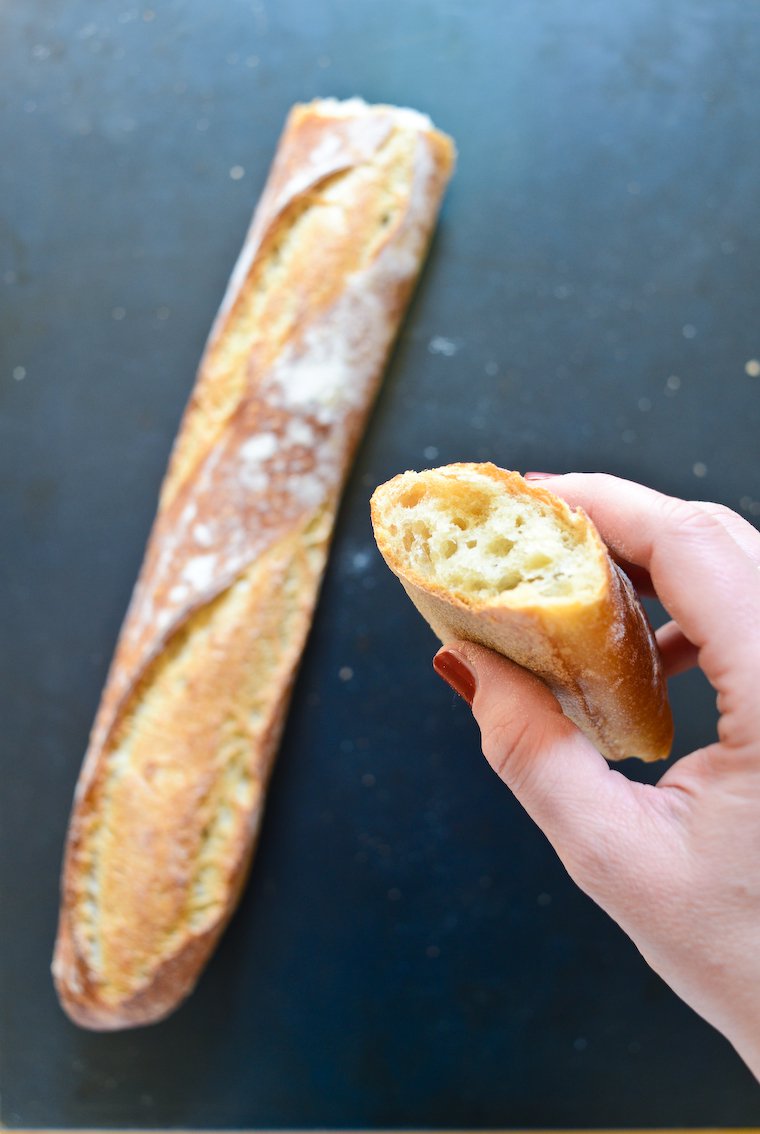 A good baguette has a nice chew to it, and offers a great contrast of texture between the robust crust and the smooth, elastic crumb.

A good baguette will keep well until the next day, wrapped in a kitchen towel, and its flavor will evolve over time, greeting you with a fresh nutty whoosh when you unwrap and toast it in the morning.

PS: We cover all of this and much, much more during my private walking tours. If you’re planning a trip to Paris, please get in touch!

PPS: While you wait for your next trip, make your own baguette using my sourdough baguette recipe.

PPPS: Maybe some cheese with that baguette?

To help you find a prized baguette of your own, I’ve created this handy map:

* To my knowledge, we have yet to see a woman baker win the competition; it remains a very male-dominated occupation. Only a matter of time before we have that to celebrate! 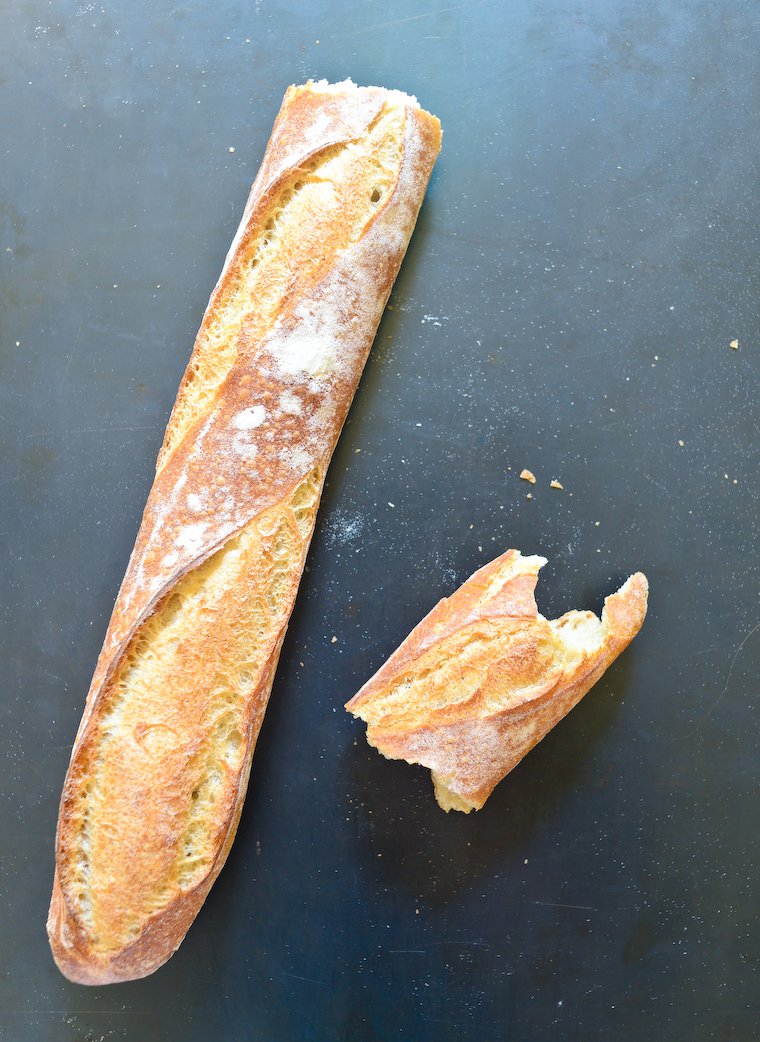 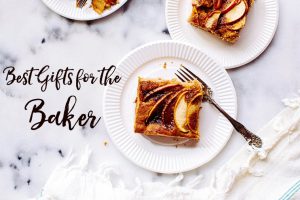 Best Gifts for the Baker 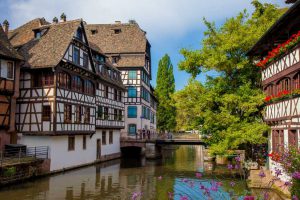 Best Eats in Strasbourg, From a Local
Sign up C&Z NEWSLETTER: Get recipes, inspiration, and Paris tips FREE in your inbox!