Hello, I'm Clotilde! C&Z is all about fresh, simple, and colorful foods from my Paris kitchen. Learn more »
Vegetables & Grains
8 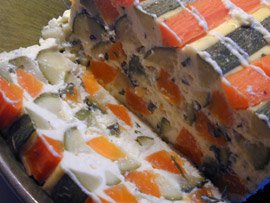 When trying to decide what to bring to the Paris Potluck the other day, my thoughts immediately turned to a terrine. I love terrines : I like the name, I like the dish you make them in (and specifically my own), I like the nice, country feel they have to them. They are also a wonderful thing to bring to a buffet, because they can usually be sliced into many servings (well unless they are micro-terrines like Barrett would have me make in my mini paper cups), they need to be made ahead, and they are best enjoyed cold or at room-temperature.

I have a great terrine cookbook I’ve mentioned before, but they were running an article on terrines in the latest issue of the French magazine Saveurs, and I decided to try one of the featured recipes. Coincidentally, it turned out that Christoph, who also attended the potluck, had bought that same magazine, and had decided to make a terrine from that same article on that same night. Thankfully we picked different ones : the plan wasn’t to turn the potluck into a side-by-side taste comparison of the same terrine made by all the attendants. Although, come to think of it, that would have been fun too!

The recipe I chose was originally for a “Terrine de légumes au fromage de chèvre et à la menthe“. I didn’t have mint on hand, but I had flat-leaf parsley and window-sill basil, so it turned into a “Terrine de légumes au fromage de chèvre et aux herbes”. The recipe has you steam carrots and zucchini in sticks, and layer them with a batter made of fresh goat cheese, eggs and faisselle. Faisselle is a kind of fresh soft cheese (usually cow’s milk, but also goat’s or sheep’s), which looks and tastes like a thick and slightly curdled yogurt. It is sold in a tub, with a draining rack inside that you pull out to separate the whey from the faisselle. If this is unavailable to you, my best substitution guess would be half thick yogurt and half cottage cheese.

My terrine turned out just as I had hoped. It was pretty easy to assemble, and it cooked perfectly in the time imparted. This is always a source of anxiety with egg-based terrines : realizing, right as you serve, that the inside of your beautiful construction is completely raw and collapsing from the center, is a torment I would not bestow upon my worst enemy — fret not, I have a slew of other horrifying things in store for them.

We brought the terrine to Isabelle and Ethan’s place, still in its dish (beautiful, beautiful dish, have I mentioned that?), and I managed to claim territory over a small area of the kitchen counter, to double-flip it onto a serving plate and slice it. It wasn’t the easiest thing to do, but Isabelle’s knife bread worked well and I managed to keep the slices together.

The terrine’s taste was very pleasant and fresh, and the cut slices looked oh-so-pretty, with their confetti of green and orange. The cheese part is moussy and soft, and the vegetable pieces, cooked al dente, come in delightful contrast. I do think, however, that this terrine would be better served on its own with some bread, than as part of a buffet : its taste is subtle and mild, and somehow all the different flavors of all these other delicious dishes overpowered it a little. But I would definitely repeat this, possibly with other vegetables and goodies layered inside, provided they’re dry enough (otherwise the cheese batter may not set) and not too heavy (or they may sink to the bottom).

Put the faisselle in a colander to drain for a few hours beforehand. Rinse the parsley and basil, pat dry with a paper towel, and chop the leaves. Wash and dry the vegetables, peel the carrots. Trim the ends, and cut all veggies in little sticks, not too thin. Steam them for ten minutes, until cooked al dente.

Preheat the oven to 180°C (360°F). Grease a terrine dish (or loaf pan), and line the bottom with baking parchment.

In a medium mixing-bowl, combine the goat cheese, the faisselle, and the eggs, and beat with a fork until blended. Season with salt and pepper, and add in the parsley and basil.

Put the terrine dish in a wider baking dish, and pour a half-inch of water in the baking dish : this is called “bain-marie“, a technique which will ensure a more even cooking, and will prevent the batter from boiling. Put this into the oven to bake for 50 minutes.

Let cool to room temperature, then let rest in the fridge for at least 6 hours. When ready to serve, run a knife around the edges to loosen the terrine, flip onto a plate, remove the layer of parchment paper from the bottom, then flip again onto a serving dish. Use a serrated knife and proceed with caution to cut slices or half-slices. Serve with good crusty bread. 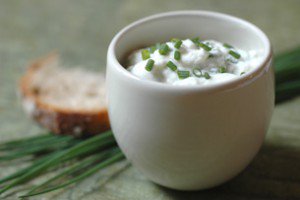 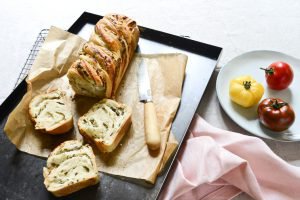 Goat Cheese and Herb Babka
Sign up C&Z NEWSLETTER: Get recipes, inspiration, and Paris tips FREE in your inbox!