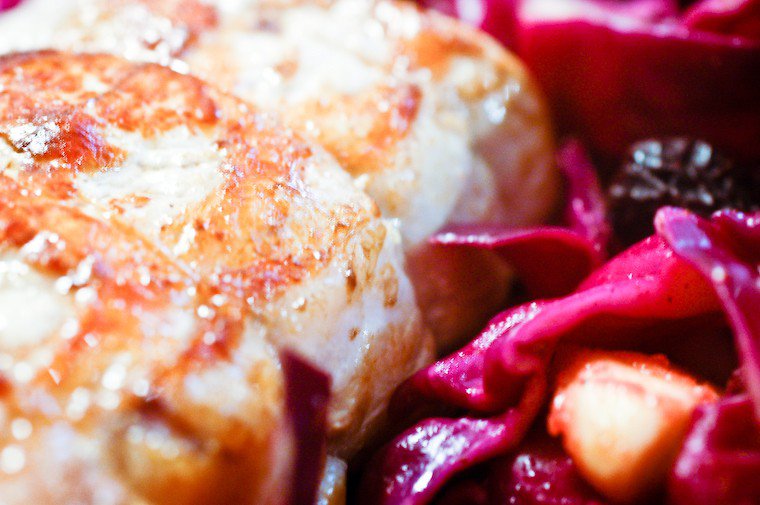 I don’t normally buy meat at the farmers’ market: I have a good neighborhood butcher that I like — his name is Mario, what’s not to like? — and my usual crop of fruits, vegetables, cheese, and flowers is usually so bulky in my rainbow-colored basket (a birthday gift from my neighbors) that it leaves room for little else, especially if I want to make it home with my shoulder still in its socket, which I sort of do.

But Meg, who shops at the Batignolles too, had recommended the farm-raised chicken from a stall that’s at the far end of the market (close to the Rome metro station) and I was so pleased with its quality that I decided to explore the rest of the selection.

This stall is operated by a couple not much older than I am, who runs a farm in the Ardennes and sells their products at very reasonable prices. I am all for supporting young farmers (they, at least, don’t set buses ablaze) so I stopped by on my Saturday market run and, in addition to four slices of ham (bien fines, s’il vous plaît) and one breaded pork foot (a 1-euro delicacy for which Maxence was quite grateful), I purchased a pork roast.

And on Sunday morning, since I had bought a head of red cabbage and some very fragrant apples from another vendor, this is the dish that naturally came together on my stovetop: the meat was quickly seared so it would remain nice and juicy inside, the cabbage and apples were chopped, combined with prunes and gently seasoned with a few automnal spices, and the whole thing was left to braise in a little red wine until we were ready for lunch.

It is a very satisfying and very easy one-pot dish that should be served with strong mustard to tease the vegetables’ slight sweetness, and my one suggestion of improvement is to brine the meat beforehand in a simple water-salt-sugar solution, so the meat will be salted right down to its heart.

Clean-Out-the-Fridge Soup
Sign up C&Z NEWSLETTER: Get recipes, inspiration, and Paris tips FREE in your inbox!