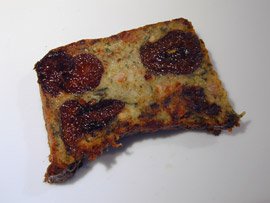 When we were at the Marché d’Aligre the other day, I noticed a charcuterie with a sign that said : “Ramenez votre pain et je réalise votre sandwich avec mes produits fermiers.” (“Bring your own bread, I’ll make you a sandwich with my farm products.”) I thought the idea excellent : a truly outstanding sandwich is made of the best ingredients on the best bread, and it is quite rare to find a vendor who has both. I also liked the fact that this charcutier recognizes what he’s good at, from what simply isn’t his specialty.

We chatted with him a little, and he explained that all his products are from a farm in Auvergne (a mountainous region in the center of France), called la Ferme du Bruel. He used to work at the farm himself, before moving up to Paris to manage that market stand. The farm is actually what’s called a ferme-auberge, a farm which also operates as a restaurant, where they mostly serve their own products.

We tasted some promising samples from the little wooden board on the counter, and bought a dry sausage which turned out to be exceptionnally good and flavorful. We also got the slice of pounti pictured above, which was giving me the eye from the display case. Pounti (also called pountari) is one of the many specialties from Auvergne : it’s a pork, swiss chard and prune terrine, with lots of fresh herbs (parsley, chervil, tarragon…) and sometimes shallots or onions. The terrine batter itself is made of eggs, flour, milk, cream and/or butter. Traditionally a dish to use up leftovers, it was usually served for supper, hot or cold, conveniently combining meat, vegetables and fruit in the same dish.

As per the charcutier’s instructions, we reheated the pounti in a skillet for a few minutes on each side, giving it an appetizing golden hue. I’ll admit I have yet to meet a terrine I don’t like, but I find the mix of flavors in pounti particularly delicious, well-seasoned and tasty, with the slight sweetness from the prunes and a very pleasant mellow texture. A quick search on Google turned up dozens of recipes which sound rather easy, and I will definitely try to make my own! 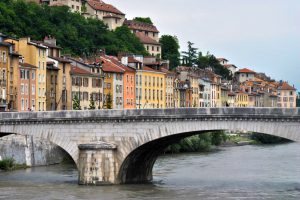 Best Eats in Grenoble, From a Local