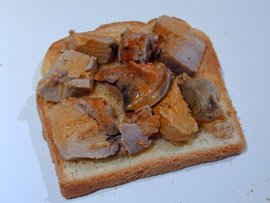 I had purchased a can of foie de lotte at the Salon Saveurs last spring, and it had been quietly sitting in our kitchen cabinet ever since, waiting for its turn to get a little attention. We finally opened it for a quick and easy lunch recently, spreading the chunks of liver on freshly toasted bread — just like we used to when I was a child and foie de morue (cod liver) on toasts was an occasional Saturday lunch treat.

Monkfish liver is sometimes referred to as le foie gras de la mer (foie gras from the sea), and quite rightly so if you ask me. The similarity between those two distant cousins is pretty striking : same pale orangey pink color, same soft texture, same peculiar earthy flavor, same sweetness at the back of your mouth.

Monkfish liver turns out to taste very much like cod liver, just a tad more subtly flavored, and is extremely enjoyable on the warm and crispy slice of bread, topped with just a squeeze of lemon and a grind of pepper.

One important thing I cannot stress enough : do not dump the leftover fish oil in the sink, under penalty of having to live with that smell for a week at least. And as much as I adore fish liver for lunch, breakfast is an entirely different matter.

Sign up C&Z NEWSLETTER: Get recipes, inspiration, and Paris tips FREE in your inbox!
Tagged: Fish 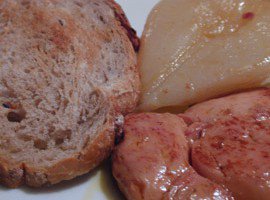 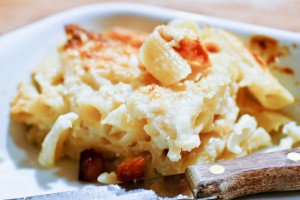 Draw Me A Fridge: Dan Barber
Sign up C&Z NEWSLETTER: Get recipes, inspiration, and Paris tips FREE in your inbox!