Hello, I'm Clotilde! C&Z is all about fresh, simple, and colorful foods from my Paris kitchen. Learn more »
French Idioms
33 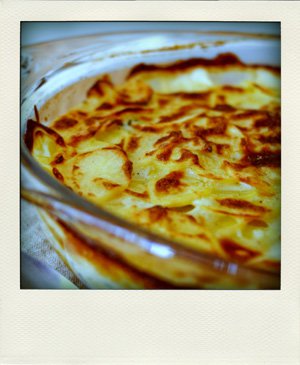 This week’s idiom is, “Le gratin.”

As cooks may already know, gratin* is the generic French term for preparations (often involving vegetables and some sort of binding sauce) cooked in a baking dish in the oven until the surface browns and becomes crusty.

But it is also a colloquial expression that refers to a social elite, an exclusive crowd who distinguish themselves by their social background, their wealth, their elegance, and/or the select field they work in. It is generally used with a subtle mix of contempt and envy by people who are not a part of that circle.

A close equivalent would be the English idiom the upper crust (before it became a popular name for pizzerias and bakeries).

Though it was originally a matter of social class only, usage of this expression now extends beyond that to consider one’s connections, talent (perceived or real), and popularity: an up-and-coming artist, for instance, can belong to the gratin without being particularly wealthy (yet) or of noble origin. Because of this, the term is often qualified further to specify the traits of the group in question: le gratin du cinéma for the movie crowd, le gratin parisien for the Parisian high society, le gratin mondain for socialites, etc.

It is frequently used with tout (tout le gratin = all the gratin, the whole gratin), which serves to point out that these groups tend to adopt a herd behavior.

Audio note: I was told I speak a little fast for some of you, so I’ve recorded the example sentence using my normal(ish) speed of voice, then more slowly to clarify the pronunciation. Will you let me know if that’s helpful?

This expression appeared in the late nineteenth century. It plays on the idea that the browned top of the gratin is the most flavorful (thanks to the Maillard reaction), likening the social elite to this coveted part of the dish, while the rest of the society lies underneath.

I’ll note that two other French expressions use the same concept: la crème (the cream, which we all know rises to the top) and le dessus du panier (the top of the basket), both of which are equivalent to the English idiom “the cream of the crop.”

* I was excited to learn that, originally, gratin was the word for the browned scraps of food that stick to the bottom and sides of the baking dish, which you have to scrape off, or gratter in French. This historical meaning is no longer in use, but it made perfect sense.

{Pictured above is my gratin dauphinois (potato gratin).}