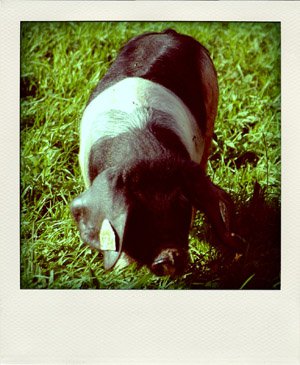 The idiom’s origin was not entirely clear to me — lard is pork, so what is there to hesitate about? — so I turned to my parents’ copy of Claude Duneton’s Bouquet des expressions imagées.

The book indicates that the expression appeared in the late 19th century, and may be a rural and parodic variation on the 17th-century idiom ni chair ni poisson (neither flesh [=meat] nor fish), which I’ve never heard used in real life but means that something is hard to identify, determine, or classify.

This meat/fish expression refers to the protracted debates between church authorities on what could and couldn’t be consumed during Lent (meat was out of the question and fish had ultimately been accepted, but some foods didn’t clearly belong to either category), and it has cookie-cutter equivalents in English (“neither fish nor fowl” or “neither fish nor flesh”), German, Italian, Spanish, Portuguese, Danish, Dutch, and Russian, which got me really excited.

The lard/pork variation would then be a way to mock the theologists who engaged in such discussions, by pretending to try and determine whether something is lard or pork, when both are unequivocally banned during Lent anyway.

* Depending on the context, lard can be translated as lard (a.k.a. pork fat, lard gras, fatty) or as bacon (lard maigre, lean, an arguable term by today’s standards).

** Depending on the context, cochon can be translated as pig (the animal, such as the Basque piglet pictured above) or pork (the meat of the animal). Here, the fact that it appears as du cochon (non-count) rather than le cochon (count) indicates that it refers to the meat rather than the whole animal.

Orange and Rosemary Pork Tenderloin
Sign up C&Z NEWSLETTER: Get recipes, inspiration, and Paris tips FREE in your inbox!