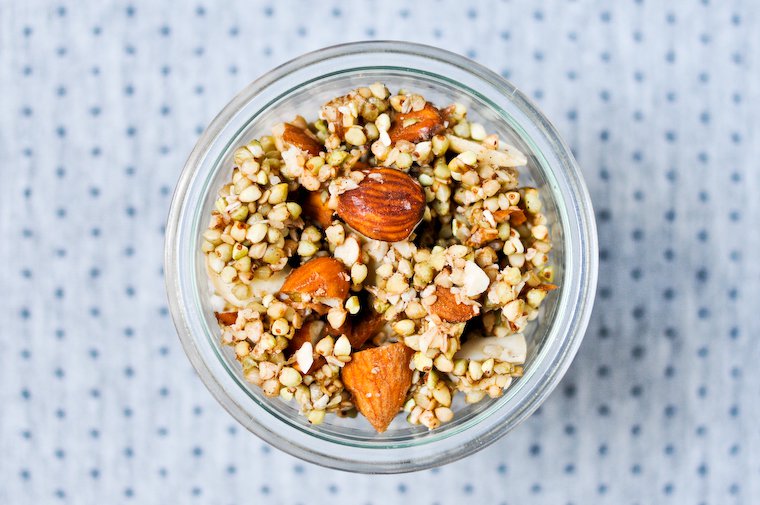 Two years ago, I met a young British woman named Poppy — that alone made my day — who introduced herself as a raw chocolatier.

I had a taste of her heart-shaped raw chocolates, assembled from raw Arriba cacao and a bunch of raw superfoods, and liked them so much I devoted one of my ELLE à table columns to them.

And when we met one day for her to demonstrate her chocolate-making prowess, she gave me a bag of her raw buckwheat granola, which was one of the items she served during the raw brunches she then hosted at Bob’s Juice Bar in Paris.

I can’t picture myself “going raw”, but I do admire the necessity-is-the-mother-of-invention effect of such dietary limitations, and I love learning about, and tasting, the entirely new dishes they spur.

If you’ve been scratching your head over the high incidence of the adjective raw in the above paragraphs, I’ll quickly explain: raw foodists, or proponents of “living foods”, consider that the nutritional benefits of plant-based ingredients are essentially lost when they are heated beyond a certain temperature — the exact threshold varies depending on whom you ask, but it’s around 40-46°C (100-115°F). So their (often vegan) diet focuses on unprocessed raw fruits, vegetables, nuts, and seeds, as well as sprouted seeds, grains and legumes.

As I’ve mentioned before, I’m immensely curious about this kind of rebellious diet. I couldn’t picture myself “going raw” — I like bread and comté cheese too much — but I do admire the necessity-is-the-mother-of-invention effect of such dietary limitations, and I love learning about, and tasting, the entirely new dishes they spur.

Especially when they’re as fantastic as Poppy’s raw granola. When I asked how she made it, I was a little deflated to learn it required a food dehydrator, which my arsenal didn’t include, and certainly regretful that I had munched down the bag so fast.

Fast-forward two years, and I find myself with a food dehydrator on loan for a month. What was my first impulse? Yes, exactly.

I emailed Poppy again to get details, and although she didn’t have an exact recipe to share, she was able to explain the straightforward process: soak* some buckwheat groats, soak some almonds and/or nuts and seeds of your choice, combine with honey, spices, and salt, and dehydrate.

I followed Poppy’s directions for the most part, filling in the blanks when it came to the actual amounts of each ingredient, and adding a little coconut oil because I felt like it. I have also read that you can sprout the buckwheat in addition to soaking — as demonstrated in these videos — and I may try it next time, but I’m here to tell you it works splendidly without that extra step.

It is really quite amazing how the somewhat slimy mixture — buckwheat groats become viscous little things when soaked — transforms itself in such crunchy, nutty clusters. The buckwheat flavor is subtle, which I like, and blends beautifully with the nuts, honey and spices to form a delicate alliance.

Because I prefer bread for breakfast, I’ve been eating my raw buckwheat granola as an afternoon snack, with fresh fruit and homemade kefir.

I think I may like it even better than regular baked granola, of which I am terribly fond, and although I’m still hesitant to acquire a dehydrator of my own, this recipe alone might be all the convincing I need.

* The purpose of soaking grains, nuts and seeds is explained here. 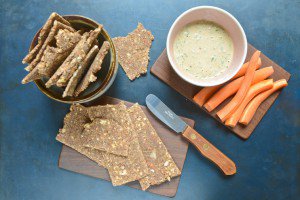 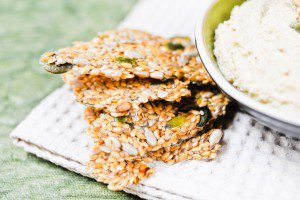 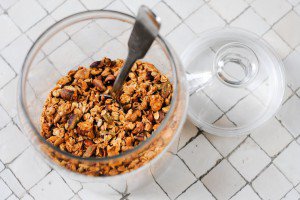 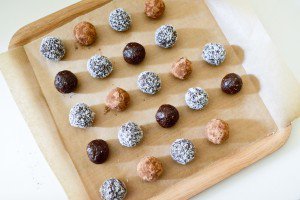