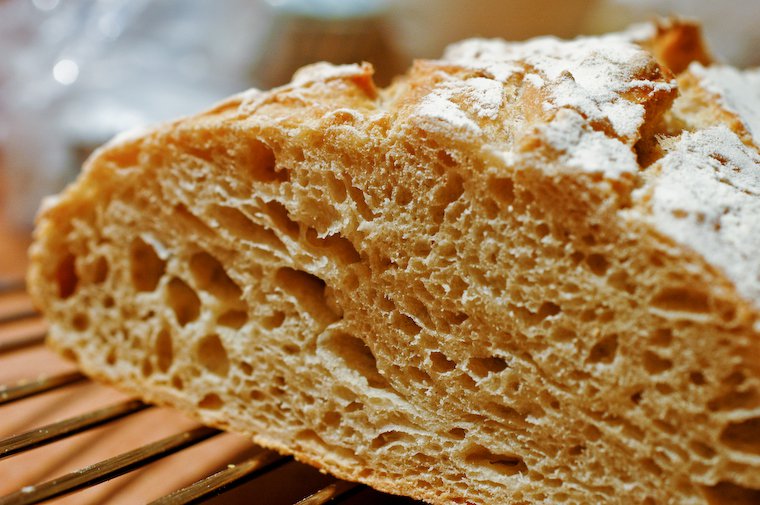 Complete fiascoes are few and far between in my kitchen. I’m not sure whom to thank for this — my lucky star, my karma, my mom? — but the fact is that the things I cook or bake very rarely end up in the trash. I have disappointments of course, dishes that turn out a bit meh despite my high hopes, but nothing quite as débâcle-like as when I tried my hand at the recipe everyone has been raving about lately, stressing how laughably easy and forgiving it is: Jim Lahey’s no-knead bread.

As laughably easy and forgiving as it may be, it did take me three trials and three days to get it to work. What went wrong, you ask?

Problem number one: the consistency of the dough. The New York Times recipe gave the amount of flour in cups: this introduces a considerable bias depending on how one measures (spooning vs. scooping), a bias that is further multiplied by the fact that the recipe calls for three cups of flour. I used the generally accepted volume-to-weight conversion for flour (one cup = 120 grams), and this produced a dough that was so soupy — more like a batter, really — I found it impossible to work with as instructed. This problem was solved by turning to C&Z readers and then bread experts, who had kindly calculated the right weight of flour based on the target hydration of the dough.

Problem number two, my stupid fault entirely. I own a sugar thermometer, an oven thermometer, and a medical thermometer, but I don’t own a thermometer that will measure the temperature of a room and I have no notion whatsoever of how warm my apartment is. So when the recipe said, “warm room temperature, about 70°F,” I decided that it meant, “on top of the radiator.” The unfortunate consequence of this — and it took me two failed attempts but just one question to Maxence to realize my blunder — was that the dough overproofed like mad. By the time I was supposed to fold it and gather it into a ball (try shaping soup into a ball, it’s fun), its peak state of proofing was a distant memory: it played dead during the second rise, and baked into a gummy pancake so sorry-looking that even Parisian pigeons would have turned their beak up, and those guys will eat anything.

Embitter or discourage me these failures did not. Judging by the number of happy customers it had garnered, the recipe had to have something going for it, and by Toutatis I was determined to catch the magic by its fluttering wings and slam it down on my kitchen counter. So on day three I prepared a new loaf, and this one turned out to be so astonishingly successful it was worth every single minute and every single gram of flour sacrificed in the process.

My third loaf was baked late on Sunday evening in my chick yellow Coquelle, and this gave it a nice shape not unlike that of the Scrameustache’s space shuttle.

Our neighbors happened to drop by for a drink and a chat just as I was taking it out of the oven (I suspect they just followed the smell from the landing); we murmured words of support to one another during the forty-five excruciating minutes it took for the bread to cool down properly. And when the time had finally come for me to slice it and we each tried a few bites (with and without demi-sel butter), I just about fainted from the combination of joy, pride, and sensory bliss.

A golden crust of ideal thickness and consistency, offering just the right amount of crisp ridges and chewy valleys, a crumb so supple and fleshy it almost felt alive, and a subtle complexity of scent and flavor that wasn’t so assertive as to overwhelm what you’d serve the bread with — this was a loaf I would be more than willing to pay good money for at the boulangerie. By the following morning it had developed the faintest hint of a hazelnut smell — this went remarkably well with a good spread of macadamia butter — and it kept very well for the two days it took us to munch our way through it.

I haven’t yet had time to start a fourth loaf, but I plan to sometime over the weekend. I feel reasonably confident about it (whichever way you look at it, there is no way my one successful loaf in three could have been beginner’s luck), and I am curious to try using a bit of chestnut flour this time and to follow Sam Fromartz’s advice to set 1/4 cup of the dough aside, let it develop in the fridge for two days, and use it for extra flavor in the next loaf. 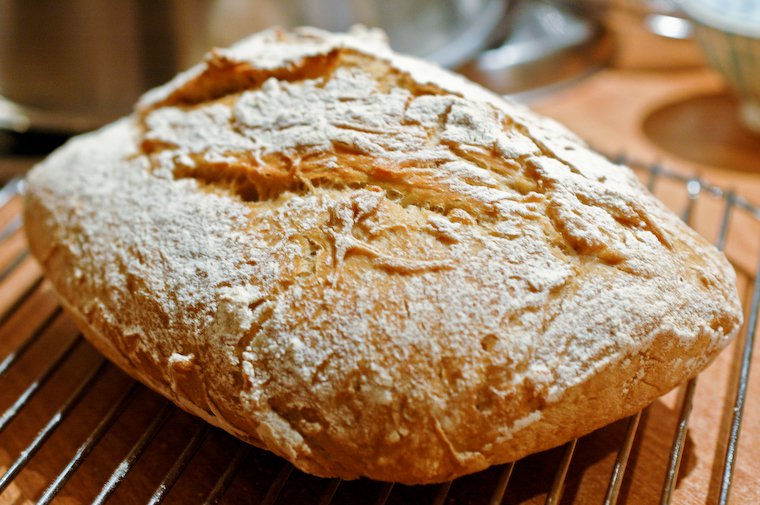 3.1
https://cnz.to/recipes/bread-brioche/no-knead-bread-recipe/
Unless otherwise noted, all recipes are copyright Clotilde Dusoulier.
Sign up C&Z NEWSLETTER: Get recipes, inspiration, and Paris tips FREE in your inbox!
Tagged: Yeast