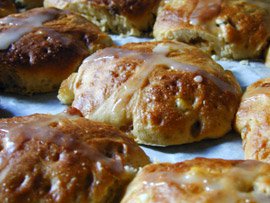 My family has always been very fond of British baked goods. Marks & Spencer’s has sadly closed off all their French stores, but when it was still around [deep sigh of nostalgia], we were their most faithful customers for English muffins, crumpets, mince-meat pies and hot cross buns, to be enjoyed with tea in the afternoon.

Only recently did I find out that hot cross buns were a traditional Easter pastry. Since I was spending the week-end with my parents and sister in our vacation house in the mountains, I suggested we try and bake some, following the recipe which Mariko had successfully used.

It was a lovely baking project to take on over a week-end : the recipe isn’t difficult in itself, but you have to start the day before, and I have found that the waiting periods between the active steps force you to slow down your pace. And this is really what that kind of getaway is about in the first place, no?

This kind of recipe also builds a nice sense of anticipation, which culminates in the eating. And when it turns out great, which it did, it is very rewarding : although the dough did not rise as much as it should have, our hot cross buns looked lovely in that home-made fuzzy way, and tasted exactly like we hoped they would. To say that we were proud as a new mom would be an understatement. Straight and fresh from the oven, they are a real treat, so good that they don’t even need butter or jam on them. But that is, of course, up to you.

This happened to be my first time working with yeast (as opposed to baking powder) and to tell you the truth, I find it somewhat nerve-wracking : will the dough rise, or will it not rise? I’ll admit I actually dreamt about it during the night. I think I really need a longer vacation.

Two things to note : the buns didn’t rise as much as they should have, and my mother’s diagnosis is that the dough was too moist because we didn’t use enough flour (I corrected the amount in the recipe below). Also, we used our favorite cookie glaze recipe, which tastes great but is very light in color, so next time I may try to make a thicker glaze, so that it forms a nice white cross on top.

Warm up the milk in a small saucepan, until warm but not hot. Sprinkle the yeast onto the milk and stir to dissolve. Let rest for 5 minutes.

Transfer the yeast mixture into a large mixing bowl. Add the sugar, salt, butter, spices and eggs, mixing well after each addition. Add the flour gradually, and knead until relatively smooth. It will still be rather wet and sticky. Cover with a clean kitchen towel and let rest for 45 minutes in a warm, draft-free place. (Our dough did not rise during that time, not sure if it should have.)

Knead again until the dough is smooth and detaches itself from the sides of the bowl. Add the dried fruits, and knead again to incorporate. Shape the dough into a ball as best you can (it will still be a bit hard to work with), and place in a buttered dish. Cover with plastic wrap, and store in the refrigerator overnight. It should have risen (slightly in our case) in the morning.

Take the dough out and leave it at room temperature for half an hour. Line a cookie sheet (or a baking dish) with parchment paper. Divide the dough in twelve equal pieces, shape them into small balls, and place them on the parchment paper, spacing them by half an inch. Cover with lightly greased plastic wrap, and let rest for 1 1/2 hour, until doubled in size.

Preheat the oven to 200°C (400°F). Remove the plastic wrap and carefully slash the tops of the balls cross-wise. Bake for ten minutes, then lower the oven temperature to 180°C (360°F) and bake for another 10 minutes, until the buns are nicely golden. (Watch them closely, they can bake pretty fast.)

The buns should be served hot, right out of the oven or reheated in the toaster. They can be eaten as is, or sliced in two and spread with a little butter, clotted cream and/or jam.

[Adapted from a recipe found at Fabulous Foods.] 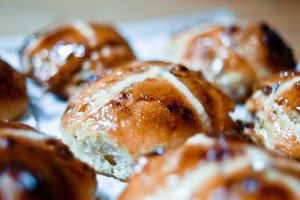