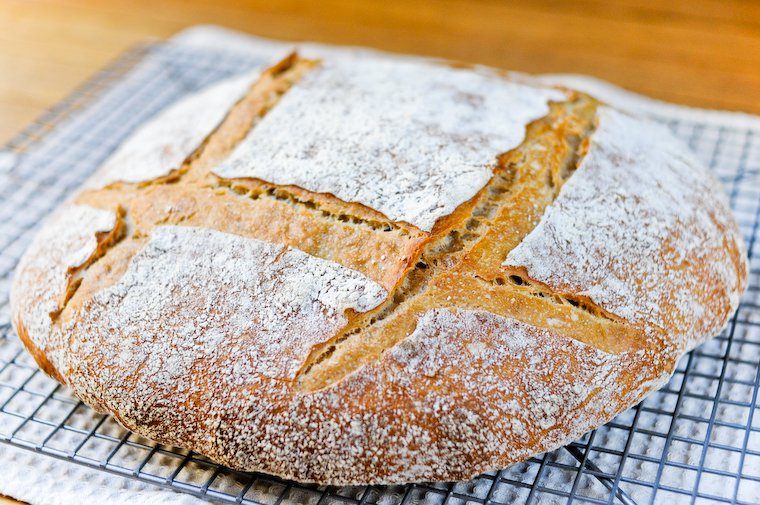 Last spring, we had a few friends over for dinner who were visiting from the US. One of them works for the excellent magazine The Art of Eating, and kindly thought to bring us the latest issue*.

It would have been a lovely hostess gift under any circumstances, but as I sat down to read it the next day, I was jump-on-the-couch ecstatic to discover that it contained no fewer than fourteen pages (fourteen! pages!) on the subject of pain au levain (a.k.a. sourdough bread), which has been my number-one kitchen obsession for the past year and a half — probably the longest-standing ever, too. (See my initial post on natural starter bread and ensuing starter-based recipes.)

This fourteen-page (fourteen! pages!) article is written by James MacGuire, an esteemed American chef and baker who, as I learned from the contributors’ section, acted as the technical editor in the English translation of Raymond Calvel’s fundamental boulangerie book The Taste of Bread.

Following a discussion on the history and technique of pain au levain, MacGuire shares a recipe I eagerly tried a few days later. It was such a success it has become our go-to bread, and I’ve baked a weekly loaf of it ever since.

The originality of the process is that it requires no kneading (but not that kind of no-kneading). Instead, the dough is simply folded over itself as it ferments in the mixing bowl, a few times every hour over a period of four hours. This develops the gluten and the flavor, yielding a wonderfully tasty loaf with minimal effort.

To be clear, it’s not that I mind the kneading, especially since I generally just use my stand mixer, but it is a noisy animal, and this method allows me to get a loaf started in the blissful silence of weekend mornings, without awaking the entire household. (And yes, I realize I could also knead the dough by hand, but I’ve never really gotten into the zen of kneading high-hydration doughs. I just get annoyed by the goo.)

Another departure from my previous routine is that MacGuire recommends keeping a 66%-hydration starter, i.e. a starter that’s fed 2 parts water and 3 parts flour (in weight) at every feeding, as opposed to the half-and-half rule I’d been following up until now. I’ve made the transition without any problem and frankly my starter seems no less or more active than it was before, but I’m sticking to it out of habit now.

How I make pain au levain

I make the recipe with French T80 flour (farine bise, a partially whole wheat flour), which is the type of flour MacGuire would use while baking in France, and often mix it with some T110 as well (farine intégrale, for which a little more of the grain husk is kept) for a greyer crumb. Because the recipe is written with American bakers in mind, MacGuire suggests emulating T80 or T110 flour by using some all-purpose flour and some whole wheat flour, which you’ll sift first to remove part of the bran it contains.

I’ve scaled down the recipe — almost halving it — to make the amount of bread we’ll eat within eight days or so, and I’ve rounded the gram amounts after the scaling, to make the recipe easier to memorize (though I admit I keep a cheat sheet on the fridge).

The overall timeline has you prepare the starter in two successive builds the day before baking (one in the afternoon, one before bed), then prepare the dough in the morning and bake it in the afternoon. This works out smoothly for those who work from home, naturally, but if you don’t, you can perhaps fit this into your weekend schedule, building the starter on Saturday and baking the bread on Sunday. I’ve indicated specific times for clarity, but you can shift the whole process according to your needs.

I still feel I have room for improvement in my understanding and use of this recipe: the oven spring is not always consistent (I got less than usual when I took the photo above) and I’d like to try and get a thicker crust, but the flavor is excellent and the crumb well aerated, so I’m already very pleased with it.

I would like to note again that there is a lot more to the article that this recipe (did I mention the number of pages it spans?) and you’ll get more insight into the recipe by reading about it in MacGuire’s words, so I encourage you to get a copy of the magazine if you can. (And you don’t need me telling you that this sort of independent, subscriber-funded, ad-free publication needs the support of people like you.)

* Issue #83 can be back-ordered on the Art of Eating website. 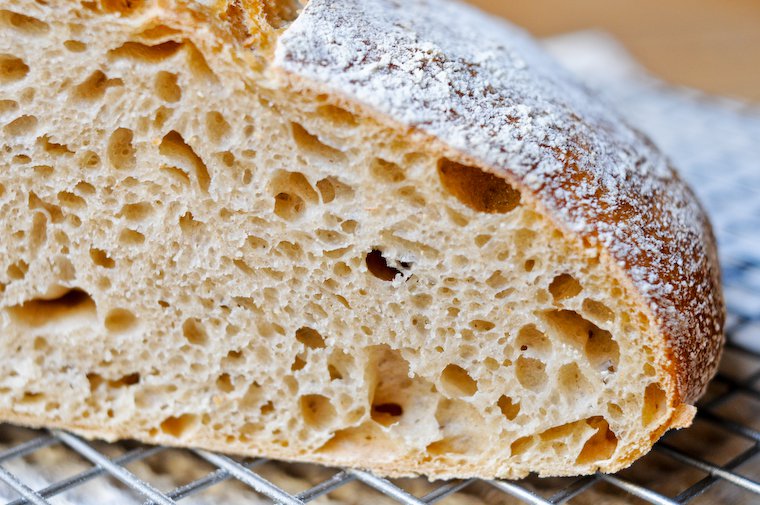 Update: After receiving the following note from Edward Behr, editor and publisher of the Art of Eating, I am reposting the recipe below.

James MacGuire, author of the pain au levain article and recipe, and I, who published it in The Art of Eating, a print magazine without advertising, have asked Clotilde to please, with our blessing, repost her version of James’s pain au levain recipe. I apologize to anyone who was offended by my concerns, expressed to Clotilde only in a private email. When I saw that so much of his effort had been borrowed, albeit adapted, I merely wrote her to say that “I’d be grateful if you were able to retreat from giving away quite so much of James’s and our work.” I was perhaps oversensitive, because our articles are sometimes taken verbatim and posted online in their entirety, including photos, without permission. I was trying to protect both the magazine and the writer. Many people may not realize that a careful piece of writing, such as James’s, has undergone two dozen or more drafts and represents lengthy back and forth with editors and copy editors. (Current online publishing exists almost entirely without copy editors.) The pain au levain article, including the recipe, represents 25 years of James’s learning and experience, and, just for this piece, two research trips to France. He hopes this and other writing from AoE will have a second life as the basis of a bread book, and too much circulation of this work online will discourage a publisher from taking on such a book. Even as print appears to be dying, online publishing relies almost entirely on information paid for by traditional media, mainly print. The issues of how high-quality information is to be paid for, as it must be in some way, in a digital age are complicated, far too much to address in a short space, and no one really understands what will take place. Certainly, I have no special knowledge. In any case, I once again apologize for offending any reader of this blog. 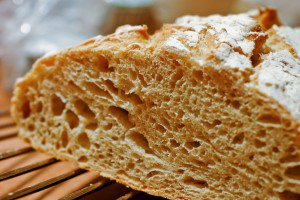