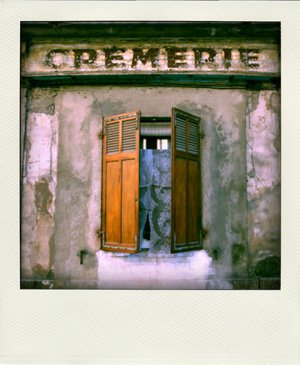 Literally translated as, “changing creameries,” it means taking your business elsewhere when you’re unhappy with the current (and possibly long-standing) arrangement.

(Cultural note: this sentence is to be understood in the context of France, where patients typically feel that they didn’t get their money’s worth if they come out of the doctor’s office without some kind of prescription. It is one of the factors that explain the considerable deficit of our health system, since the cost of these not-so-necessary medications is covered in part by the sécurité sociale.)

This idiom appeared in the early nineteenth century.

The word crémerie is to be understood here as the place where one buys cream, butter, and cheese. (The modern term for that is fromagerie, an interesting illustration of the shift of focus these shops have undergone.) But at the time the expression was formed, creameries often doubled up as simple working-class restaurants, and the term was used more broadly for any drinking or eating establishment.

It’s hard to say why this idiom was built on the idea of the creamery and not, say, the bakery, the café, or any place one would frequent on a regular basis, but such are the mysteries of language.

Finally, I’ll draw your attention to the fact that there is some dissension regarding the accent in the word crémerie. Although the word crème has a grave accent on the “e”, both crémerie and crèmerie are acceptable. Crémerie was considered the proper form throughout the twentieth century, but the 1990 spelling reform, which sought to remove irregularities where possible, proposed to make crèmerie the main accepted spelling. Many of the modifications proposed in this reform have been ignored, however, and I personally prefer to stick with crémerie.