Hello, I'm Clotilde! C&Z is all about fresh, simple, and colorful foods from my Paris kitchen. Learn more »
Soups
20 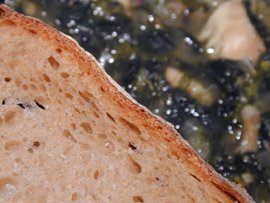 Foreword : you might notice that the picture above has the focus on the bread and not the soup. The soup will have to forgive me, I love it dearly and all, it is really the star of this post, but I’m sorry, soup, you are just not photogenic. At all.

La mâche, which I’m told translates to lamb’s lettuce, is a kind of salad which comes in small bouquets of soft green leaves in the shape of drops, and has a mild taste. I like its flavor and texture very much, I like that it looks very pretty and I like that “ça change de la salade!“, as a recurrent ad campaign says : “It’s a nice change from salad”.

We happened to have a bunch of mâche that was wilting so fast the naked eye could witness the process, and we also had leftovers from an astounding roasted chicken we had bought at our favorite rôtisserie a couple of days before. I considered making a chicken salad, but for all the daffodills and blooming buds, it is still winter here, so a soup felt much more appropriate.

This is the first soup I make that involves some kind of meat, and I am just now fully grasping the concept of chicken soup and what the fuss was all about : boy, talk about a comforting and fragrant soup! It is infused with flavor from the meat, bones and skin of the chicken which simmer in it for a while. Mâche turns out to be as delicious cooked as it is raw, with so mild a taste there’s almost a hint of sweetness.

It is also a very easy soup to put together, the only slightly annoying step being to remove the bones and skin. It would work with boneless skinless chicken breasts, but I still highly recommend using bone-in and skin-on pieces of chicken, I’m sure it really makes a difference in the depth of taste.

In the meantime, rinse the lettuce under cold water : the little bouquets have a tendency have a surprising amount of dirt trapped in, so being thorough is worth the effort. Trim the ends if you see little root filaments sprouting, otherwise leave them whole.

Add the lettuce, the chicken meat and the bay leaf into the saucepan. Sprinkle with salt and pepper, and add four cups of boiling water. Bring to a simmer and let cook, covered, over medium heat for about twsnty minutes, until the lettuce is thoroughly wilted and the meat starts to fall off the bones.

Discard the bay leaf. Remove the pieces of chicken from the saucepan and transfer to a cutting board : using a fork and a knife, separate the edible (the meat) from the non-edible (bones, skin and cartilage). Shred the meat roughly and put it back into the soup.

At this point, you can choose to purée none, some or all of the solids, depending on how you like your soup. Ladle into bowls, and serve with thick slices of crusty bread, toasted.

25 French Recipes for Thanksgiving
Sign up C&Z NEWSLETTER: Get recipes, inspiration, and Paris tips FREE in your inbox!