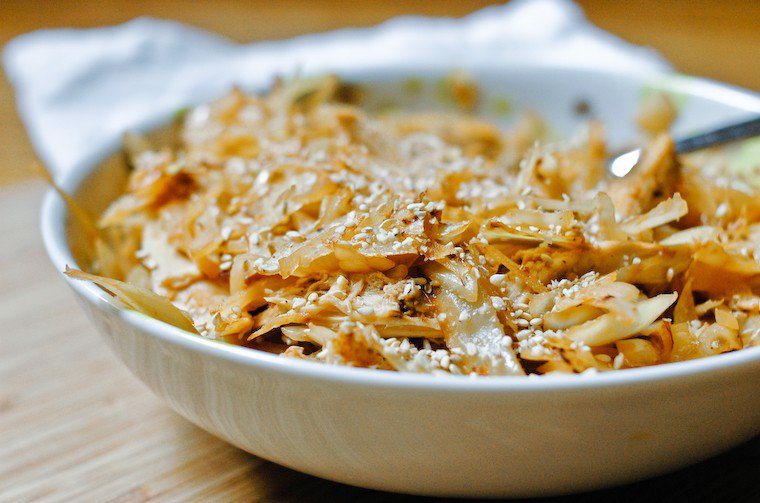 I’ve recently read a collection of stories by Lara Vapnyar called Broccoli and Other Tales of Food and Love. The six stories in this pretty volume talk about Russian immigrants to the United States, and use the revealing lens of food to show how they adapt to their new lives. Stories about migrants never fail to move me, and perhaps also because I was very fond of my Russian coworkers when I lived in California, I thought these particularly poignant.

The opening story is called A Bunch of Broccoli on the Third Shelf, and without disclosing too much about the plot — I detest spoilers and those who perpetrate them — it is about Nina, who buys vegetables every Saturday morning from the Korean and Russian stores in Brooklyn but, for a number of reasons, never gets around to cooking them.

And it is of Nina that I thought when I realized that the head of cabbage I’d bought at the greenmarket some time before wasn’t going to cook itself. Buying it had sounded like a virtuous idea at the time — cruciferous vegetables are so good for you — but every time I pulled the vegetable drawer open, my hand always seemed to land on some other, more immediately appealing option.

I am lucky that this particular variety, called chou blanc in French, seems to have been designed to withstand the reluctance of the cook, and keeps very well: the outer leaves may lose some of their luster, but if you peel those off, the cabbage looks as good as new underneath.

Still, I was hoping to find a non-dull way to use it, and I remembered the recipe my friend Molly posted not long ago, in which shredded cabbage is seared in the wok and seasoned with a combination of chili sauce and soy sauce. I don’t have a wok nor the sambal ulek that she recommends, but I do have a skillet and some sriracha, and I thought they would do nicely.

Having roasted a chicken in my brand new oven the night before — to excellent but messy results — I also had scraps of meat left over. These joined the cabbage in the skillet for a most satisfying lunch, with a sprinkle of toasted sesame because it seemed a natural fit and I find it hard to resist such a cute little sesame mill.

As I mentioned above, my cabbage was a chou blanc, i.e. a smooth and tight head of cabbage that’s light green on the outside and off-white on the inside. You could, however, use the cabbage of your choice in this recipe, so long as it’s the crisp kind that would work in coleslaw. Molly also suggests adding a bit of sliced fennel, but it’s a little early for that around here.

Speaking of Molly, surely you know that her first book is released today in the US? A Homemade Life is a memoir with recipes that I had the chance to preview a few months ago, and I am confident you will enjoy it as much as I did.

3.1
https://cnz.to/recipes/meat-charcuterie/spicy-cabbage-and-chicken-stir-fry-recipe/
Unless otherwise noted, all recipes are copyright Clotilde Dusoulier.

Spinach Recipes: 70 Things To Do With Fresh Spinach
Sign up C&Z NEWSLETTER: Get recipes, inspiration, and Paris tips FREE in your inbox!