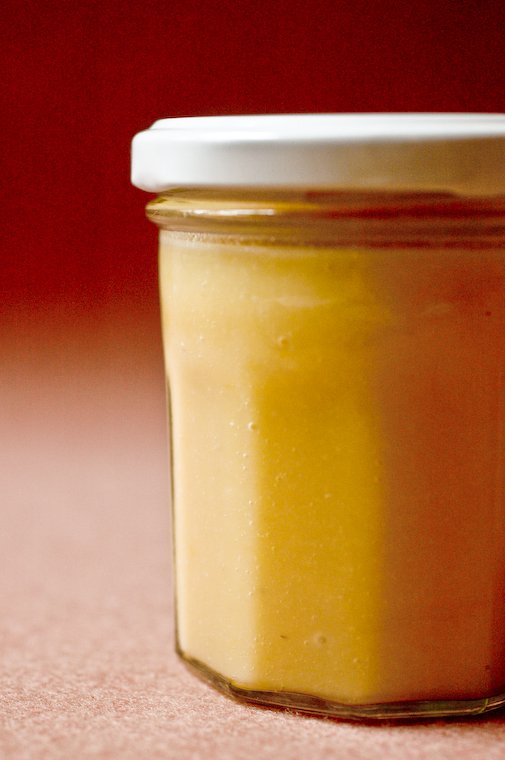 I like it when I can count the degrees of separation between an ingredient and myself, especially when I only need the fingers of one hand to do so. In this case, there were just four degrees of separation between me and three large lemons: my sister Céline has a boyfriend I adore, named Christian. Christian has a father, who lives not far from Nice. And this father has a bountiful lemon tree, currently overloaded with beautiful, smooth-skinned fruit, pale yellow like the baby clothes you buy when you don’t know if it’s a boy or a girl. So when Céline went to spend a few days in Nice recently, she came back to Paris with half a dozen jumbo lemons, which my mother and I shared gleefully.

These lemons, being organic and all, had lemon curd written all over them (if you looked at the rind very very carefully with a magnifier, close to the stem, it said lemon curd in super fine print).

My first attempt at lemon curd, many moons ago, did not quite qualify as a success. I don’t remember where I had gotten the recipe from, if I had followed it with enough care, or if it was just a case of beginner’s crap luck, but as I was standing over the pan, dutifully stirring the mixture, it became painfully apparent just why they called it a curd. It curdled all right.

Because I was young and too proud to admit defeat, I insisted on eating it anyway, spreading my morning toast with curdled curd, which tasted fine if you managed to ignore the tiny lumps of viscid egg white staring up at you with fierce little eyes. Thankfully, I had made a miniature batch with just one lemon, so it was soon done away with, and I could get on with my life.

Years later I tried my hand at lemon curd again, this time with a bit of research, and it appeared that my first attempt had been somewhat misguided: I had cooked the curd directly in a saucepan, when it is really best to do so over gentle heat, in a bowl set on a pan of simmering water. The result was infinitely more convincing, and this is the method I used again yesterday with my sunny lemons.

Wanting to try something a little different, I made an almond lemon curd this time, using one less egg than I normally would, and adding lightly toasted ground almonds to the thickened mixture. This adds a lovely textural twist, giving the lemon curd just a touch more presence on your toast, and the subtle, nutty, and toasty almond flavor is a great partner to the tartness of the lemon (lemon and almond are such good flavor friends that they have four letters in common, although this doesn’t work in French at all).

Aside from spreading lemon curd on toasts of baguette in the morning, or on English muffins, crumpets, and scones (a regional affinity thing), I like to spread it in the middle of a horizontally split yogurt cake, make sandwich cookies, or fill twee little tarts. I should probably note here that I am one of those people who drink lemon juice straight from the juicer, without water or sugar, so it is safe to say I like a tart lemon curd — if you prefer a milder one, use a bit less lemon juice, or a bit more sugar.

Makes 3 cups (the recipe can be halved, using one egg and one yolk).

Suggested variations: use unsweetened coconut flakes in place of ground almonds, add dark chocolate to the mixture as it cooks to make a ganache lemon curd, or blend in cacao nibs once the curd has cooled and thickened a bit.

Coconut Butter Recipes: 20+ Divine Ways To Use Coconut Butter
Sign up C&Z NEWSLETTER: Get recipes, inspiration, and Paris tips FREE in your inbox!