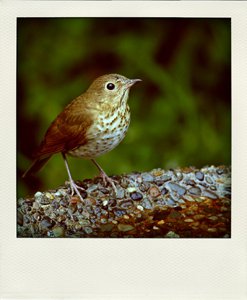 Literally translated as, “In want of thrushes, one eats (or settles for) blackbirds,” it means that one must find a way to make do with what’s available. In other words, beggars can’t be choosers.

The reasoning behind this is simple: la grive and le merle are closely related game birds*, but the former was traditionally held in higher regard by gastronomes, who deemed its flesh more delicate.

I’ve never tasted either, and judging by the steep decrease of recipes provided under “grive” in the two editions of the Larousse Gastronomique I own and cherish — from thirteen recipes in the 1938 edition to just four in 2007 –, they are less commonly consumed than they once were.

One explanation may be that French regulations now prohibit the sale of grives: hunters can eat or give away what they catch, but they aren’t allowed to sell them to restaurants or retailers. (The North American equivalents of the European thrush and blackbird are protected, and therefore can’t be hunted at all.)

* Being neither an ornithologist nor a hunter, I found it surprisingly difficult to make sense of the differences between grive, thrush, merle, and blackbird, and work out an accurate translation: they seem to be umbrella names for various birds that aren’t the same species when you change continents, and some sources suggest that one is a subspecies of the other — or vice versa, I’m confused. Also, thrush is the name of an oral yeast infection, and I wish I’d been warned before I began to search for pictures.