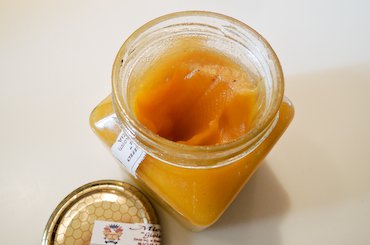 {This is part of a series in which I share three delicious things recently tasted and enjoyed. Please feel free to share your 3VGT list in the comments below, or on your own blog!}

My latest “three very good things” are as follows:

Maxence and I recently chanced upon a gelateria* in Paris’ seventh arrondissement. It was pouring rain, but that didn’t lessen the pull of gelato one bit, and as we sat down to our little tubs of vanilla (for Maxence) and chocolate sorbet (for myself), I noticed a shelf stocked with miscellaneous jarred goods of Italian origin.

Among them, a Composto Miele e Pistacchio from Sicily, described on the little label as a mix of 85% honey and 15% pistachios. These being two of my favorite things yet seldom seen together, I promptly bought a jar. We tried it on toasted sourdough the next morning, and were smitten with this creamy, golden spread, the flavors of honey and pistachio melding together in a most titillating way.

The only problem is that it is disappearing fast, and I’m not sure I’ll be able to get more: the lady who served our ice cream informed us that the gelateria would be closing soon, and the company that makes the honey, a Gioiello di Sicilia based in Milo, Sicily, has a limited online presence: the website listed on the label no longer exists, and their facebook page is dormant.

So what I plan to do instead is make my own: I’ll mix some of the creamy springtime honey I bring back from the Vosges with a bit of the pistachio paste from Terre Exotique I’ve been saving for just this type of worthy purpose. 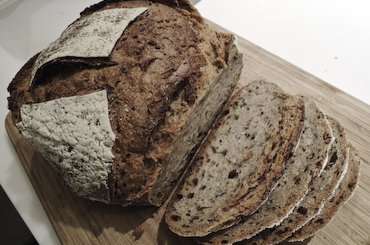 I am always on the lookout for purveyors of good bread for my breakfast toast, and I was delighted to discover that Julhès, a multi-faceted food store on rue du Faubourg Saint-Denis, has a decently priced and very well done selection.

On my first visit I honed in on the pain fermier (“farmhouse bread”), a rustic sourdough-leavened bread made with a bit of rye flour and lots of seeds, and I was instantly hooked. The good news is, Maxence’s offices are now close by, which means I get a surprise loaf of it every now and then. 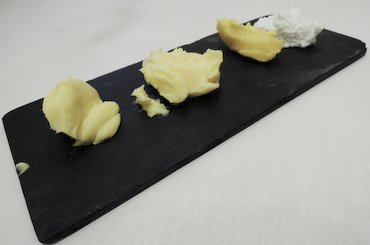 A couple of weeks ago, I was invited to take part in a special lunch cooked by Dan Barber at the Plaza Athénée in Paris. It was part of Alain Ducasse’s “Rencontres Essentielles” lunch series, for which he invites chefs he admires from around the world.

The chef from Blue Hill had put together a menu that showcased the work he’s been doing with breeders to come up with new varieties of fruits, vegetables, and grains, based on heirlooms but perfected with modern breeding techniques to maximize flavor as well as disease resistance. (More on that soon when I share a Q&A with the chef.)

Lunch was wonderful from beginning to end, but one of the things that most captured my imagination was the butter tray: it featured three different butters, each made with the milk from a single cow from Dan Barber’s dairy farm. (The fourth mound to the right in the picture is rendered pork fat.)

I can’t honestly say I was able to taste the difference — my palate was far too stimulated at this point to do a proper butter tasting. But in a world where the food industry’s ambition is to produce uniform, homogenized goods, I love the idea of letting each cow express its singular traits through its own butter production, each a distinctive shade of yellow from cream to buttercup. 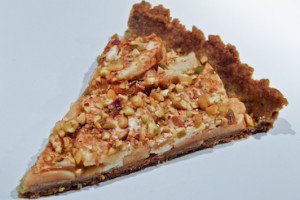 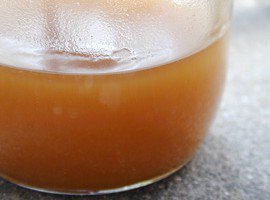 Honey from Lourmarin
Sign up C&Z NEWSLETTER: Get recipes, inspiration, and Paris tips FREE in your inbox!