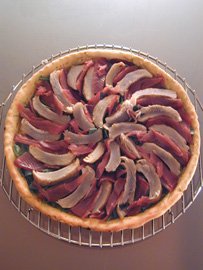 …and here is the tart I made with Pascale’s pâte brisée!

Slices of artichoke hearts and strips of smoked tuna, on a bed of roquette leaves and a smooth layer of mascarpone cheese. The artichoke’s tender sweetness, hand in hand with the salty strength of the tuna — I cannot recommend the pairing enough.

I found the smoked tuna in the smoked salmon aisle at my grocery store (“oh wow, smoked tuna!”, she exclaimed to herself), and I used frozen artichoke hearts bought at Picard, the all-popular French frozen foods store.

And of course, if you’re not too horribly pressed for time, a homemade crust is a must (and she rhymes!).

If the artichoke hearts you are using are raw, boil them for six to eight minutes in salted water until tender. If they are jarred, simply drain them.

Rinse and dry the rucola. Cut the artichoke hearts in slices, the tuna in strips, and set aside. In a medium mixing-bowl, beat together the eggs and the mascarpone until combined and smooth.

Spread the mascarpone mixture over the bottom of the tart shell. Sprinkle with pepper. You can sprinkle a little salt if you like, keeping in mind that the tuna is already salted. Arrange a layer of rucola leaves, and top with the artichoke and tuna, in a pretty pattern if you can (and if you care).

Bake for about twenty minutes, or until the sides of the crust are golden and the filling has set slightly (it’s not meant to be solid). The tart can be made ahead and reheated for ten minutes before serving. Serve with an arugula salad dressed with a tangy vinaigrette. 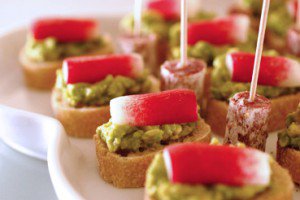 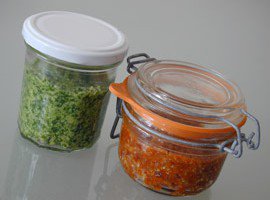 A Duet of Pesto : Rucola Pesto and Red Pesto