Hello, I'm Clotilde! C&Z is all about fresh, simple, and colorful foods from my Paris kitchen. Learn more »
Events
15 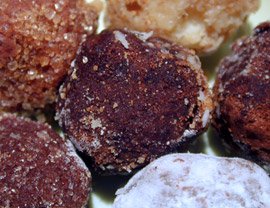 A Chocolate Trade Show – has anybody ever heard of a better concept? The Paris one takes place every year in late October, when the weather gets a little chilly and Christmas is getting near and people need to warm their hearts and stock up on chocolate goodness. Passionate as we are about our chocolate, Marie-Laure and I just had to attend, and we decided to go to the late opening on Friday.

The show is held at the Carrousel du Louvre, a vast shopping and convention center built under the Louvre. It is set up in five very large rooms, and was pretty packed when we got there, but as the evening wore on (we stayed there from 7 to 10 pm!) it got better. Next year we’ll have to remember to get there a little later to avoid the crowd.

Most of the space is devoted to the stands of various chocolatiers who sell their products. There is also a display of dresses and shoes made of chocolate (models were walking around wearing the dresses – they did not look very comfortable to be frank), an exhibition about the history of chocolate, a chocolate and dessert bookstore (ahem – I already own half the books they sold), a collection of antique chocolatières (a chocolatière is like a teapot, but for hot chocolate), as well as a job center were candidates and employers could meet (let me tell you, if you are a trained pâtissier, there’s plenty of work out there for you!).

We really had a grand time, walking around and sampling goodies to our heart’s content : teeny bites of chocolate and pralines, chocolate-dipped fruit skewers, a yummy drink made with hot chocolate and Cointreau (an orange liqueur), truffles, chocolate meringue, chocolate brioche, chocolate gâteau basque…

Worth noting were : a Japanese chocolate maker, who unfortunately did not offer samples, but sold the most intricately decorated pralines ever ; David Van Laer (chef at the excellent – and beautifully named – restaurant Le Maxence) who sold his terrine de lapin au chocolat (chocolate rabbit terrine) and chocolate foie gras ; the IESA, an arts education institute, who advertised their chocolate tasting courses (I may look into that) ; and a stand which sold chocolate beer.

And of course, we had to buy stuff! Here’s my loot : velvety Belgian truffles (pictured above) in different flavors (plain, coffee, walnut, speculoos [those succulent Belgian cinnamon cookies], the intriguing “oil” and praliné), a bar of the very dark (78%) Fortissima chocolate by Jean-Paul Hévin, a box of six canelés – plain and chocolate – by Baillardran (based in Bordeaux, they make the best), an assortment of ten types of chocolate from around the world (Chuao, Indonesia, Sao Tome, Trinidad, Venezuela, Java, Ghana, Madagascar, Colombia and Equador), beautifully packaged in colorful paper, and a bar of Sao Tome “Brut” (crude) chocolate, a chocolate that’s crushed for only one hour (instead of the ordinary 72), so that a lot of cocoa bean fragments still remain. Marie-Laure bought some of the same things, as well as a slice of chocolate pain d’épice (honey spice cake) and a jar of confit d’oignon au chocolat (chocolate onion jam) to serve with game and terrines (the same stand also sold an interesting chocolate fig jam).

Now, if only we could do this every Friday night… 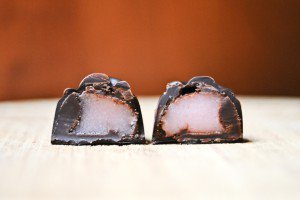 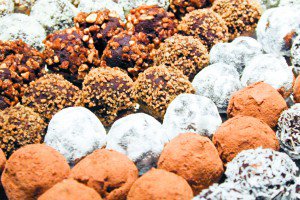