Hello, I'm Clotilde! C&Z is all about fresh, simple, and colorful foods from my Paris kitchen. Learn more »
Events
20 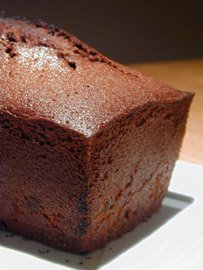 On Sunday afternoon, we had a few friends over for the goûter. In attendance were : Marie-Laure and Ludo, with whom we had had brunch earlier in the day ; my friend Sophie, who used to work at my company ; Stéphane and Caro, who are friends from college ; and our neighbors Stéphan and Patricia. To feed this crowd, I wanted to make something chocolate. I know, I know, I surprise myself too, sometimes.

When Pierre Hermé‘s Chocolate Desserts cookbook came out, one of the magazines I read had an article that published four of them : they don’t quote the book word for word, they just give the recipe essentials, which still makes the book worth buying, as Pierre Hermé always gives very detailed instructions. All those recipes looked great, but you have to make choices in life, as hard as they may be. So I set out to make the apricot and ginger chocolate cake.

Language note : in French, the word “cake” (which is pronounced more or less like “kek“) means not just any cake – that would be “gâteau” – but a cake that’s baked in a loaf pan.

I’m trying to teach myself organization so first of all I prepared all the things you have to melt or dice or bring to room temperature (i.e. butter, apricots, chocolate, ginger, almond paste and milk). Very professional of me, no?

I then boiled the apricot dices for a minute in a cup of water, let them rest for a minute, then drained and patted them dry. In a large bowl, I sifted together the flour, chocolate and baking powder.

In the food processor, I mixed the sugar and the almond paste until it looked like coarse sand. I added the eggs, one at a time, mixing for a while between each. I poured in the milk, and mixed again. I then added the chocolate flour mixture, and mixed until just combined.

I poured this back into the large bowl, folded in the apricot, ginger and chocolate bits, and then the melted butter. This was poured into the pan, and put into the oven to bake. After an hour like the recipe says, I took it out and it looked really good, but the knife I inserted came out nothing like clean, so I put it back in for 15 minutes. Unfortunately, this caused the top to burn a little on the edges – ugh I hate that – but after that time it was cooked.

I let the pan cool on a rack for 10 minutes, and then tried to unmold it. Boy, it gave me a really hard time, sticking at the bottom and almost breaking in half, but I managed to disciplin it back into shape.

Right before serving, I cut the cake in slices. The little chunks of chocolate, apricot and ginger showed nicely. They had sunk to the bottom somewhat, but they had on the magazine picture too. This cake tastes really good. The almond taste doesn’t really come through, but it certainly contributes to the overall texture. The cake part is nice and moist and chocolaty, and ginger and apricot work particularly well with the chocolate, both for flavor and bite.

Final note : I was in a bookstore today and spotted Pierre Hermé’s cookbook, so I leafed through it and checked out this recipe. Two things : he suggests covering the cake with foil for the last half-hour – I wish the magazine had kept that tip in the recipe. And also, Pierre’s apricot, ginger and chocolate bits are way down the bottom of the cake, so there! 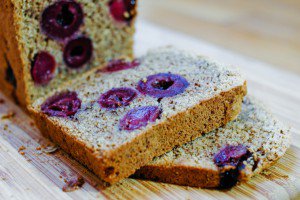 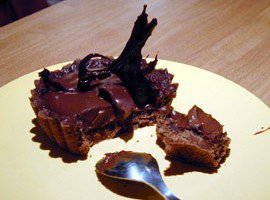