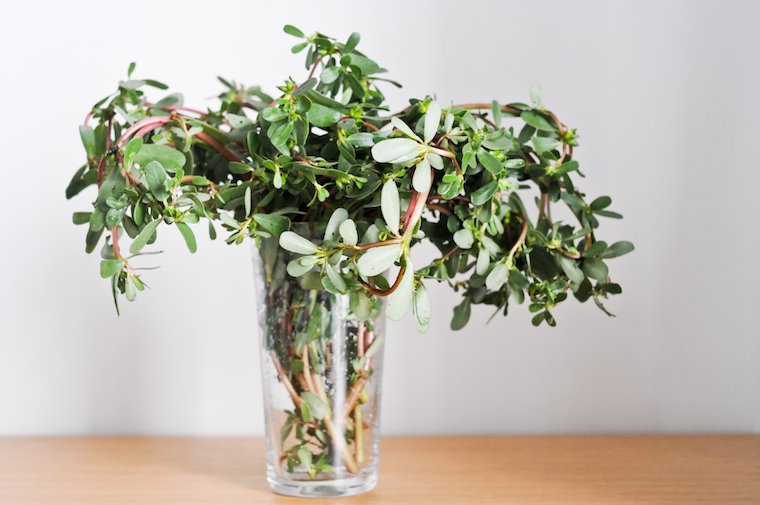 Have you ever cooked with purslane, or Portulaca oleracea as it is known to botanists? It is a succulent plant whose edible, delicious leaves are crunchy and slightly mucilaginous, with a tangy lemony and peppery flavor.

It is generally harvested from early June till the end of summer, and can either be foraged or purchased, usually from a farmers market or through a CSA share. The wild variety, which is actually considered a weed by many gardeners, is rampant and has pinkish stems (see picture above), while cultivated varieties tend to grow vertically and display greenish stems.

Purslane has been consumed since ancient times, and because it grows easily in hot and not too dry climates, it is represented in many cuisines of the world, from Greece to Mexico, and from Turkey to India by way of South Africa. (Here’s a handy list of its aliases in different languages.)

It is a bit of a nutritional powerhouse, offering remarkable amounts of minerals (most notably calcium, iron, magnesium, and potassium), omega-3 fatty acids, vitamins (A, B, C), and antioxydants. It is thought to be an important component of the Cretan high-life-expectancy diet, and Michael Pollan has called it one of the two most nutritious plants on the planet in his In Defense of Food manifesto (the other is lamb’s quarters if you want to hunt for that too).

Although the stems are edible when still young (and can be pickled), cooks usually keep only the leaves and thin, spindly stems at the top, which are simply plucked from the central stem. The process is slow-going, but rewarding in the end. Because purslane grows so close to the earth, and especially if it is foraged*, it should be rinsed very well, in several baths of fresh water (I usually do three), with a bit of vinegar.

And once you have your bowlful of squeaky clean and vibrant little leaves, what do you do with them? Purslane is mostly eaten raw, but can also be cooked for a change of pace. I’ve gathered 45 purslane recipes for you — and hope you’ll add your own favorites in the comments section!

* Some people report that they find it growing from sidewalk cracks or in city parks, but I wouldn’t recommend foraging it from there.

– Serve as a side salad with duck magret
– Stew with pork in a tomatillo sauce, Mexican-style (puerco con verdolagas)
– Stew with lamb and lentils

– Use purslane in a stuffing for baked fish
– Process purslane with a little cream or yogurt and make a green sauce to drizzle over fish
– Serve as a side salad with wild salmon, lobster, or crab

– Make green smoothies (purslane will make them creamier) with blueberries, kiwis, peaches, or tropical fruit (it’s okay to freeze purslane for use in smoothies)
– Make a cucumber and purslane slushie
– Make tea with the leaves; it is said to help ease headaches, bring down a fever, soothe sore throats, and combat inflammation.

– Pickled purslane
– Purslane vinegar
– Purslane pesto
– Purslane tzatziki (use purslane instead of, or in addition to the cucumber)
– Add to scrambled eggs and omelets
– Make green pancakes (recipe from my book!)
– Toss with pasta as in this pasta with tetragon
– Sprinkle over pizza just before serving
– Use as a garnish for gazpacho, chilled zucchini soup, or asparagus soup
– Add to sandwiches for crunch; it would be great in a lobster roll or an ABLT.
– Add to salsa and salsa verde
– And if you ever tire of it, feed it to your chickens! Their eggs will be richer in omega-3 fatty acids.

Sign up C&Z NEWSLETTER: Get recipes, inspiration, and Paris tips FREE in your inbox!
Tagged: Purslane

A Taste of Balsamic Vinegar
Sign up C&Z NEWSLETTER: Get recipes, inspiration, and Paris tips FREE in your inbox!