Hello, I'm Clotilde! C&Z is all about fresh, simple, and colorful foods from my Paris kitchen. Learn more »
Tips & Tricks
29 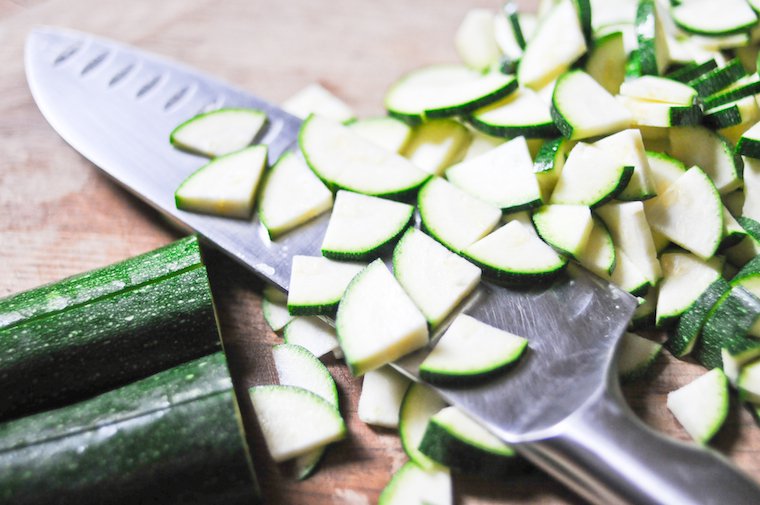 The food! It sticks to my knife!

One of the reasons why I love to cook is one I have in common with people who knit: it is involving enough to keep your mind off world peace issues, but leaves enough mental space that you can wander, hold imaginary conversations, turn sentences around in your mind (everyone does that, right?), and generally putter about in the coziness of your own head.

Prepping vegetables launches me into such inner monologues, and in recent months they have been dominated by this nagging question: why does food stick to my knife, and how do I make it stop?

You know the phenomenon, I’m sure, but let me describe it for you: whenever I slice something (say, an onion or a zucchini), the pieces I’ve just cut tend to stick to the right side of the blade (I’m right-handed), so that when I’m cutting the next slice, the pieces that are stuck on there get pushed up and off by the new slice, and fall either to the right of my blade (unruly, but fine), or tumble off the cutting board and possibly onto the floor (messy), or fall to the left side of my blade, in which case I’m likely to cut into them again moments later (extra annoying).

After composing an imaginary email in my head over a few zucchini-slicing sessions (I eat a lot of zucchini), I finally sat down and wrote to Peter Hertzmann, the spectacularly knowledgeable creator of the à la carte website and associated blog, cooking instructor, and author of the must-own Knife Skills Illustrated, of which he kindly offered me a copy when we met in San Francisco a few years ago (more details about the book)*. And naturally Peter had answers, which I’m sharing below, mixed in with a few more tips I gathered in my research.

So, why does food stick to my knife?

The main reason is surface tension, a physical phenomenon that makes the surface of liquids resist an external force. In this case, it means that foods with a high water content (and many vegetables are more than 90% water) create slices with a moist surface that clings to the flat of the blade.

And how do I make it stop?

You could decide to subsist on low-water foods — I’m sure a diet of beef jerky and rice crackers will do you a world of good — or you could adopt one or more of these three strategies:

Strategy #1: Get the good kind of knife

If you’re in the market for a new chef’s knife, or if the sticking bothers you enough to justify replacing your current one, you can look into:

– A knife with a full convex grind (see diagram). This means the blade profile is a continuous curve from edge to spine, reducing the area of contact between slice and blade. Here’s a pretty convincing video.

– A knife with dimples on the blade (people refer to those as kullens, grooves, divots, or scallops, and to such blades as Granton Edge [a patented name] or kullenschliff) or with a hammer finish (tsuchumi in Japanese, as on this model). Both of these essentially create air pockets along the blade to reduce surface contact, and therefore surface tension. Peter says he hasn’t found the dimples to make that much of a difference, and indeed my knife has dimples and food still sticks to it; perhaps it would it be worse without the dimples. Peter votes in favor of the hammer finish, and this is what I’ll consider when I decide to replace my current knife.

– A knife with a long blade. Peter recommends one that is longer than 25 cm or 10 inches, as this makes the proper slicing technique — as described next — more efficient.

In general, when using a knife, the desired movement is one of slicing, rather than chopping. Slicing involves a continuous, almost circular motion, up and down but also to and fro (watch Video 3 from 2:18).

Not only does this reduce your effort (the blade enters into the food sideways rather than pressing down on it) and produce neater results, it also allows you to increase your cutting speed, which in turn reduces sticking. Additionally, if there is some sticking going on despite your efforts, each new slice will be pushing the previous one sideways rather than just upward, and this is a bit less messy.

The sticking, if it has to happen, is considerably less annoying if:

– you use a large cutting board on a uncluttered work area, so the food has room to tumble off and settle, and you don’t waste time chasing zucchini slices behind pots of utensils and jars of multivitamins,

– you frequently “wipe” the side of the blade (I use my fingers, some people use the edge of the board) to detach the pieces of food that are sticking to it,

– and you have a prep bowl ready (I use my colander) to regularly transfer the food you’ve just cut, and avoid getting overrun with piles of slices and cutting twice into the same pieces.

Do you share my annoyance with the sticking? Do you use any of these tricks to reduce it, or have you found more?

* Peter has released an hour-long video on knives that’s a great primer. For a further introduction to his style, and the way he looks at cooking in a manner different from what it is usually thought of or taught, check out his video on sauces, in which he goes against Escoffier’s teachings. 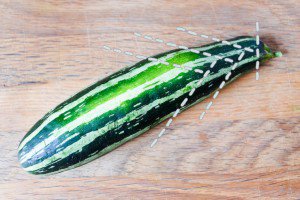 A Better Way to Slice Zucchini
Sign up C&Z NEWSLETTER: Get recipes, inspiration, and Paris tips FREE in your inbox!