Hello, I'm Clotilde! C&Z is all about fresh, simple, and colorful foods from my Paris kitchen. Learn more »
Soups
8 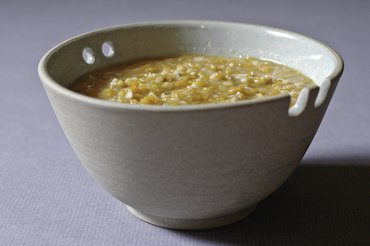 Fall officially came into office barely a week ago, and while the weather hasn’t been particularly drab (we’ve even had a few unseasonally beautiful days), it seems as though a giant switch had been flicked in some great control room somewhere: all of a sudden, with no warning at all, I felt like eating soup.

So. Veggies were purchased, a cocotte was whipped out (this is just a manner of speaking considering the weight of it, but ’tis the spirit that counts), and this carrot chestnut soup was improvized.

In fact, I fully intended to make a leek and carrot soup, but just as I was looking for onions in our onions-and-miscellaneous-other-things drawer, I spotted a half-open package of brise de châtaigne, purchased at the Salon Saveur last spring. Brise de châtaigne could be described as tiny nuggets of dried chestnuts. I had first discovered it at the previous spring edition of that food show, had enjoyed it tremendously — as illustrated by these galettes for instance — and was looking for new ways to use it.

Brise de châtaigne works really well in this soup: it cooks side by side with the carrots, and both ingredients are such good friends in terms of flavor and texture that they team up beautifully to create one hearty and velvety soup, with plenty of aromatic subtleties (the caraway seeds bring in a nice touch without talking too loud) and a delightful sweetness, the perfect fit for autumnal moods.

Note: I have indicated chestnut substitutions in the recipe, but if you’d like to try brise de châtaigne for yourself you can contact the producer, Maurice Zerathe, at +33 (0)4 75 39 26 39 and enquire about the cost of shipping and handling for the number of packages you would like and where you want them shipped.

Heat some olive oil over medium heat in a big soup pot. Add in the onions and a tablespoon of water, and cook until soft and translucent, stirring from time to time to avoid coloring. Add in the carrots, sprinkle with salt and caraway seeds, and cook for about ten minutes.

Puree, blend or mash to the desired consistency using your favorite tool or appliance (I use this). Taste (caution, it’s going to be very hot) and adjust the seasoning. Serve immediately or reheat the next day. 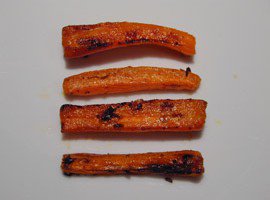 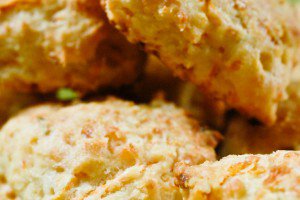 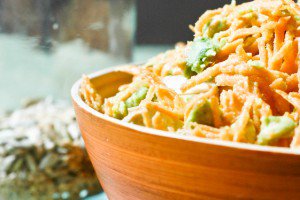 Grated Carrot Salad with Avocado
Sign up C&Z NEWSLETTER: Get recipes, inspiration, and Paris tips FREE in your inbox!