Hello, I'm Clotilde! C&Z is all about fresh, simple, and colorful foods from my Paris kitchen. Learn more »
Shops & Markets
29 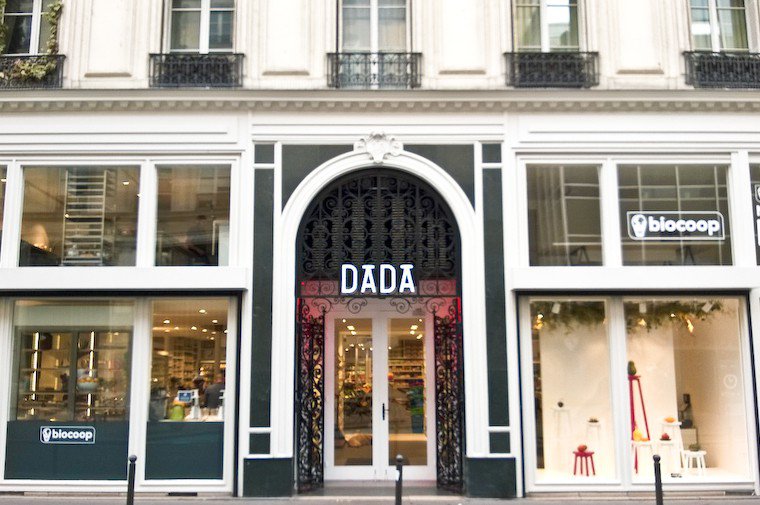 Dada Biocoop on rue de Paradis in the 10th

I’ve recently received requests from a couple of readers who were about to move to (or spend a little while in) my fair city, and were wondering about natural and organic food in Paris, and where to find them.

Agriculture biologique is French for organic farming, and organic goods are referred to as produits bio. Organic produce, grains, dairy, and meat are increasingly popular with French consumers, and although they still come at a higher price than conventionally grown goods, they are now more widely available than ever.

In Paris, here are the sources you can choose from: 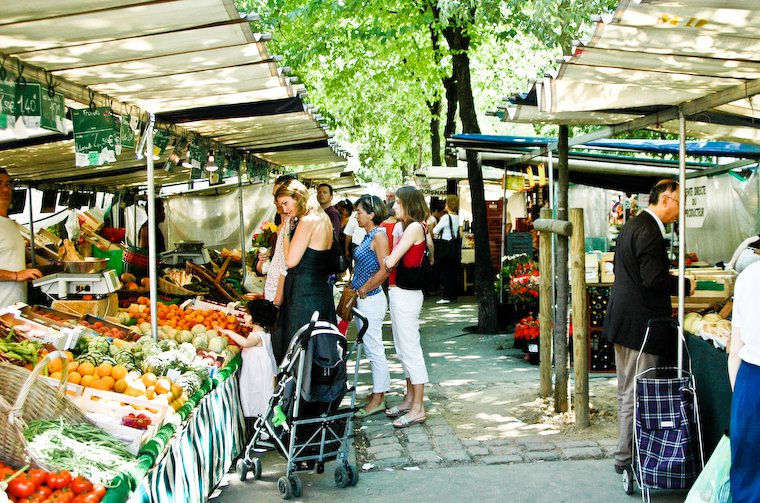 These are not, strictly speaking, farmers markets, as they welcome both growers and retailers (and growers who complement their own offerings with produce purchased from elsewhere), so it’s worth asking for clarification if you’d rather buy your produce directly from the grower.

Prices also vary widely from stall to stall and can reach ridiculous heights, so it’s good to take a full walk around the market and compare prices, and to have about you a general sense of how much you’re willing to pay for your multicolored radishes and your goat cheese faisselle.

Beyond the organic nature of the produce, the secondary benefit of these markets is that they’re great places to discover unusual varieties of herbs, fruits, and vegetables that you would never find in conventional stores.

Note that other, conventional greenmarkets (see full list) are likely to have one or two vendors selling organic produce. 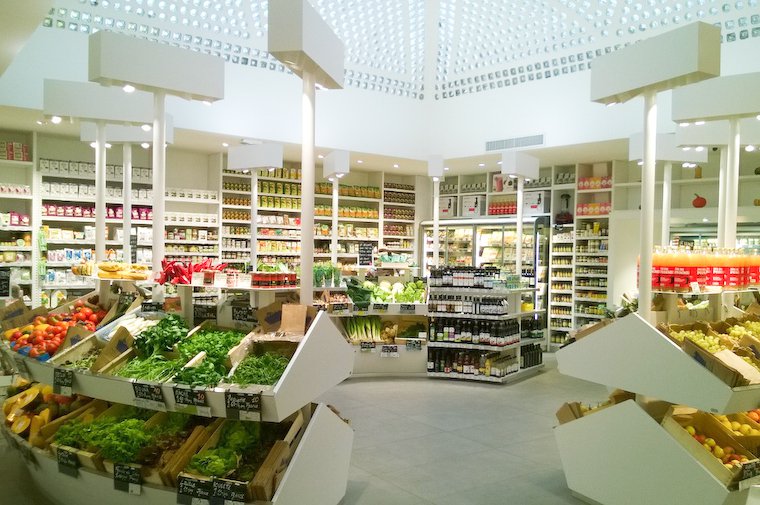 In them you will find everything from fresh and packaged foods, to cleaning supplies, to beauty products. They will be your best shot if you’re trying to find alternative flours and sweeteners, unrefined sugars, whole grains, legumes, nuts, oils, non-dairy milks, soy products, gluten-free ingredients, and anything remotely granola. 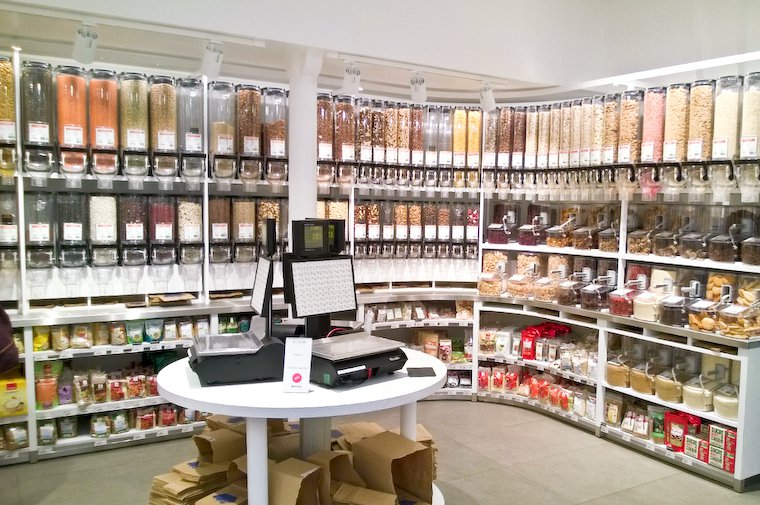 Do read the labels on all those foods: just because they’re sold as organic doesn’t mean they’ve been grown reasonably close by (I avoid buying foods grown in countries where I don’t trust local standards), or that they don’t contain palm oil of uncertain origin.

I find that the Naturalia stores around me often have problems with produce that sits around for too long, but this likely varies from store to store. “Bulk” sections are available from Biocoop, Bio c’ Bon, and Les Nouveaux Robinsons stores, and it’s generally cheaper to get your nuts or grains from those (remember to compare with the packaged price anyway).

Some of those stores have been recently created or made over and offer a fresh and contemporary face; others give off a musty seventies vibe whose charm is debatable. 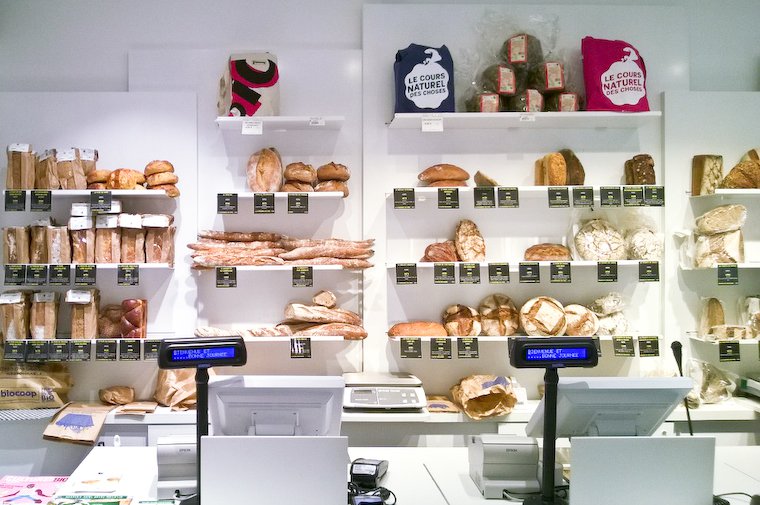 Look out for independent organic shops near you; the website Paris So Biotiful offers a good directory listing.

They will be smaller that the ones mentioned above (which are nowhere near Whole -Foods-sized), but they are likely to distribute different brands and/or be open to special-ordering the things you need, especially if you become a regular.

And if their prices aren’t crazy, you may want to support them instead of the bigger players. I like Le Carillon d’Olivier at 34 rue des Abbesses in the 18th; they’re super friendly and their produce is particularly fresh. You should also check out the amazing La Récolte in the 17th, and L’$Eacute;picerie végétale in the 11th.

Over the past few years, mainstream grocery stores have caught on to the organic trend, and now offer a growing variety of organic goods, often under their own brand: fresh produce, packaged meat, and dairy, as well as dry goods which you will find either in their special little organic/health food ghetto section, or sprinkled throughout the store among their conventional peers. Look for the green logos on the labels, either the French “AB” (for agriculture biologique) or the European leaf made of stars.

Again, checking the origin of the foods you buy (is it really a good idea to eat organic apples from Argentina while in Paris?), study the ingredients lists, and compare prices between stores. 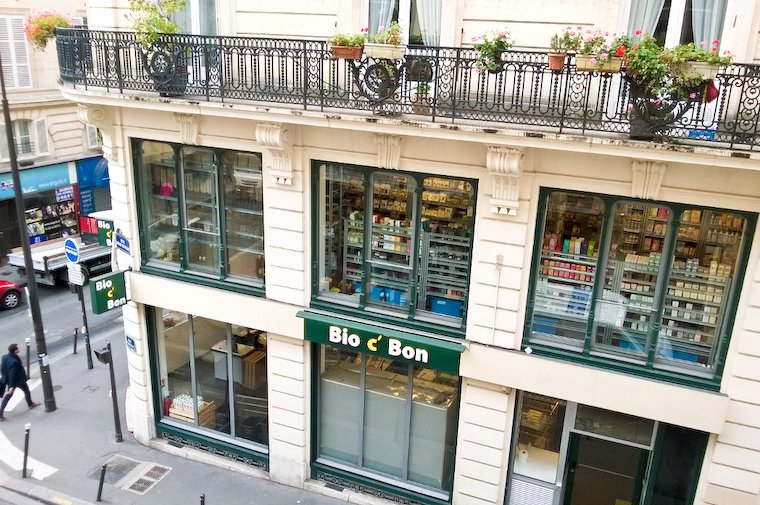 It has become almost obligatory for organically-inclined lunchtime restaurants — such as Rose Bakery, Claus, Cococook, etc. — to offer a tiny épicerie section featuring beautifully packaged goods you may not find elsewhere, so keep an eye out for those when you eat out (and, forgive the broken record, but pay attention to the prices; impulse purchases can severely bust your budget).

Any good tip or favorite source to add to the list?

Further reading: My friend Phyllis Flick has written a guest post on shopping for local produce in Paris on David Lebovitz’s blog. 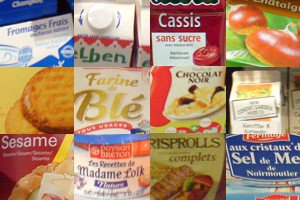 Twelve Hours in Paris
Sign up C&Z NEWSLETTER: Get recipes, inspiration, and Paris tips FREE in your inbox!