Hello, I'm Clotilde! C&Z is all about fresh, simple, and colorful foods from my Paris kitchen. Learn more »
Parents Who Cook
4 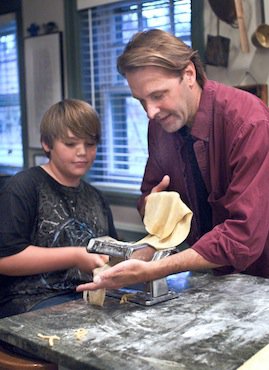 Michael Ruhlman is an American writer who specializes in understanding the professional chef’s craft, and making that expertise accessible to the home cook.

He has published twelve books, including the best-selling French Laundry Cookbook and the game-changing Ratio, which reveals the cooking formulas that govern basic preparations so you can free yourself from recipes. His latest book is Ruhlman’s Twenty, about the twenty founding concepts and techniques of cuisine. He also writes an excellent blog at ruhlman.com.

Michael lives in Cleveland, Ohio, with his wife, photographer Donna Turner Ruhlman, and their two teenaged children. I am delighted to have him share his thought-provoking views on cooking with and for children.

Can you tell us a few words about your children? Ages, names, temperaments?

Addison is 17 years old, her brother James is 13. She’s a handful, but beautiful and smart, fiercely independent, wants nothing more than to be out of the house and with her uncommonly sweet friends. James is a boy boy, loves gaming, having fun, and practical jokes. A sweetheart, delightful in conversation, very mature and empathetic.

Did having children change the way you cook?

No, not really. I was just learning to cook professionally, so I had all these extra cooking muscles to rely on. But I always cooked real food. I tried to cook real puréed food for them when they were little, but mostly what they’d prefer was the jarred stuff. Then they moved on to scrambled eggs and cheese, then all white food.

As they grew and their tastes and dislikes changed, I occasionally made three different meals simultaneously to please everyone. Because I could. Addison’s favorite meal is beef stir-fry, but James doesn’t like it, so I cut a chunk of flank steak to sauté, and slice the rest for stir-fry. I stir-fry bok choy or broccoli, but Addison avoids it and James will only eat it raw. That kind of thing. It makes for a lot of dishes to clean.

In the newborn years, try to schedule meal times for when they’re asleep or routinely occupied. If they’ll sit in a bouncy chair while you eat, so much the better. Donna often ate while she breastfed. Many many meals were interrupted, or concluded early.

The saving grace? It’s over before you know it. Days are long, years go by in a snap.

Be sure to plan at least one quiet meal with your spouse each week where you can linger at the table, even if it’s lunch.

Over time, have you developed staple dishes or strategies that make it possible to prepare a meal and keep the kids happy at the same time?

I learned to be a stronger cook when they grew as they literally took rides on my legs as I moved from stove to counter. One of my culinary instructors told me she broke her crème anglaise because of kids riding on her legs, and it astonished her that she’d made such an error — this is a really good professional chef and even she screwed things up.

Cooking with kids underfoot is really hard, so keep it simple. Don’t try to make sausage or bake a cake and make the icing if you’re going to be continually interrupted. Have toddlers play with kitchen tools while you cook, whisks and pots and pans. Do stuff when they’re playing or watching TV or napping, unless you need a nap too. Buy good-quality prepared foods if you need to, but ones that need to be reheated because the smells of cooking relax everyone.

Be organized. Plan ahead. Keep it simple.

Have you found ways to involve your children in the cooking/baking process?

Teach them how to cook an egg and make a grilled cheese sandwich, just a couple of basics. Now I can say, “James, want a grilled cheese sandwich?” He says “Yes, please,” and I say “Cheese and butter are in the fridge, you know where the bread is.” And I leave. This annoys him but he makes the sandwich. He’ll scramble his own eggs, think of adding cheese, toast some bread, pour a glass of milk, watch Myth Busters.

Teach them how to make what they love: find out what their favorite dish is and teach them how to make it. I’ve taught Addison a simple vegetable stir fry: sauté Chinese mirepoix (scallions, garlic, ginger) then add chopped pepper, onion, broccoli, whatever she wants. A simple dipping sauce for dumplings is ginger and garlic soy sauce, a little vinegar, a little sugar. She puts this on her rice. It’s a healthy meal she can make on her own.

And when you have a relaxed hour or afternoon, do cool transformative stuff, like turning water and flour into dough, playing with dough, watching it rise like magic. Teaching them why it’s rising is an added benefit: “These little bugs you can’t see are eating the flour and releasing gas, yes seriously. No, not actual bugs, microorganisms.” I taught James blender Hollandaise sauce, and he and his friend were amazed: “How did that liquid butter turn opaque and almost solid?” And I explained.

The first time I made popcorn in a pot, James was astonished. He thought it could only be microwaved. He then kept asking me to make “Pot popcorn.”

Teach them how cooking can be fun, and they might come up with a really cool idea.

As someone who’s passionate about food, can you talk about the joys and challenges of feeding your kids, and how you go about teaching them to be happy, adventurous eaters?

As far as feeding them as they grow, put good food in front of them and their bodies will chose what they need. When they go through a white food phase (evolutionary response), make them try everything but don’t force anything. Again, make sure a wide variety is available: kids like raw fruit and vegetables so keep that out and available. Use real food, like butter not margarine. Buy good baguettes.

Find out what they like, and make them part of the process of meal-planning. Addison is picky but loves a baked potato and Brussels sprouts. James hates Brussels sprouts, but they’re not bad when I shave and sauté them rather than boil them. James loves most of the food I make these days, he’s a good eater. He loves a fried egg on bibimbap.

I find easy staples that everyone likes. Especially ones that can be done ahead, like pasta and meat or marina sauce, and a salad. Or a beef stew. Get them to like beans, and you’re golden! Make double batches to freeze. Also plan dishes that allow for flexibility, such as making your own burritos where they have a lot of different things to choose from.

Is there anything you’d like to add on the subject of cooking and children that wasn’t covered by the above?

I’d like to add how important it is to cook food in the house, not just eat together. To have your kids see you cooking is good. But people underestimate the deep, humanizing power of the smells of cooking in the house. When you come home late from play practice and smell a chicken roasting in the oven, it eases you without your knowing why. I know that when the oil in my wok is crackling hot and the scallions and garlic and ginger cook, that smell is going all the way up to the third floor and the kids know dinner is on its way.

Eat together but don’t talk about school or unpleasant things. Talk about interesting current events, issues that pertain to their age. Ask if they witness racism at the mall. Is the app Snapchat a good or a bad thing? Do violent video games cause actual violence? Do you have an opinion on whether or not the president is doing a good job? Did you know that some people are still without housing after hurricane Sandy, months ago — how do you think you would handle it?

When your kids have friends over, don’t feed them separately but make them a part of your mealtime.

Teach your kids where the food comes from.

Paris Cheese Shop How-To: 6 Tips to Buy Cheese Like The French
Sign up C&Z NEWSLETTER: Get recipes, inspiration, and Paris tips FREE in your inbox!