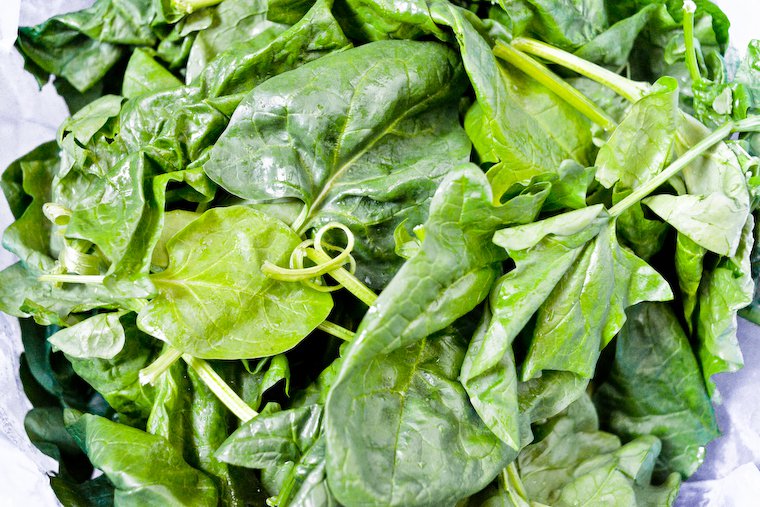 Fresh spinach is in season right now, and I got a huge bag of it from my favorite grower, so I’ve been looking for great spinach recipes to use it. I naturally turned to Twitter and Facebook to hear about your favorite spinach dishes, and I thought I’d share the master list. Thank you all for your inspired suggestions!

– Sautéed in butter
– Wilted in a pan with slivers of garlic (lots of it).
– Simply sauté with olive oil, sliced garlic and lemon juice.
– Spinaci alla romana, with pine nuts, garlic, and sultanas
– Toss in a hot skillet with garlic, olive oil, salt. Cover, remove from heat, wilt 5 min. Leftovers can be mixed into fromage blanc.
– Chop up spinach, sauté in sesame oil, and serve with quinoa or rice, and tofu baked with miso or soy sauce.
– Stir-fry quickly with garlic, extra-virgin olive oil, and a dash of soy sauce.
– Sautéed in a skillet with rice vinegar, a drizzle of sesame oil, toasted black sesame, and fresh ginger, Japanese-style.
– One-pot spinach and quinoa pilaf

Add puréed spinach to pancake dough: the combination of the two creates a whole new taste.

– Spinach and feta omelette
– Spinach and mushroom omelette
– Spinach frittata
– In eggs florentine.
– In an egg bouillabaisse
– Sautéed in a little bit of olive oil with a fried egg.
– Spinach and egg crêpes with cheese
– Put puréed spinach into pancake dough. When heated in oil, it will give the whole thing a wonderful caramelized touch. It’s not pancakes with spinach, the combination of the two creates a whole new taste.

– In a spicy Asian-style noodle soup.
– Spinach and lentil soup with fresh sheep’s milk cheese.
– A soup of fried leeks, frozen peas, spinach and vegetable stock. Boil for a few minutes, blitz, then eat.
– In a coconut curry or bean soup.

Spinach in pasta and noodles

– In pasta with ricotta or mascarpone cheese
– With ricotta, to stuff lumaconis (snail shell pasta)
– Sautéed with tomatoes, pine nuts, garlic, sliced black olives in olive oil, topped with feta in pasta.
– Spinach pesto with almonds, really good olive oil and lots of grated pecorino; best with homemade pasta.
– Turn it into a pesto with walnuts and pecorino; eat on fresh bread or pasta.
– Elbow macaroni with Comté cheese, spinach and nutmeg
– Fry with bacon and tomatoes to top pasta.
– As a vegetable for mie goreng (Indonesian fried noodles)

– If it is really fresh, in a salad with beets and hard-boiled egg: mix the yolk with oil, vinegar and mustard for a creamy dressing.
– In a salad with tuna and roasted pumpkin seeds
– Mix with mandarin oranges, feta cheese, sunflower seeds and a Champagne vinaigrette.
– Wilted spinach salad: fry some streaky bacon, pour off most of the grease and deglaze with a bit of red wine vinegar. Pour the hot dressing over your spinach along with tomatoes, a hard-boiled egg, minced shallot and the crumbled bacon.
– Spinach salad with warm bacon vinaigrette
– In a salad with fresh mint and a Thai vinaigrette (made with fresh ginger, rice vinegar, soy sauce, lime juice, and oil).
– Spinach, kale (or arugula), almond and date salad with a lemon dressing.
– Spinach salad with pumpkin roasted in maple syrup, creamy feta, walnuts and a nice vinaigrette.

Spinach in sandwiches and pizza

On pizza, with an insane amount of garlic.

– In BLT’s
– In a sandwich with hummus
– Use on an egg breakfast sandwich.
– Spinach pizza with fresh garlic, bacon, and dollops of fresh sheep’s milk cheese
– In a Chicago-style stuffed pizza, with an insane amount of garlic

Spinach with meat or fish

– In a coulibiac.
– Grill salmon with olive oil; lay on top of spinach; eat it all up.
– Spinach with grilled sole, washed down with Belgian beer.
– Fish florentine
– In meatballs, with lemon zest
– With croûtons made from Poilâne bread, lardons from a farm-raised French pork, and a Roquefort cheese sauce.

– In green juices and green smoothies: spinach, almond milk, banana and frozen blueberries is a favorite combo.
– Purée and freeze in ice cube trays to use for smoothies.

Any cool ideas of your own you want to add?

Sign up C&Z NEWSLETTER: Get recipes, inspiration, and Paris tips FREE in your inbox!
Tagged: Spinach