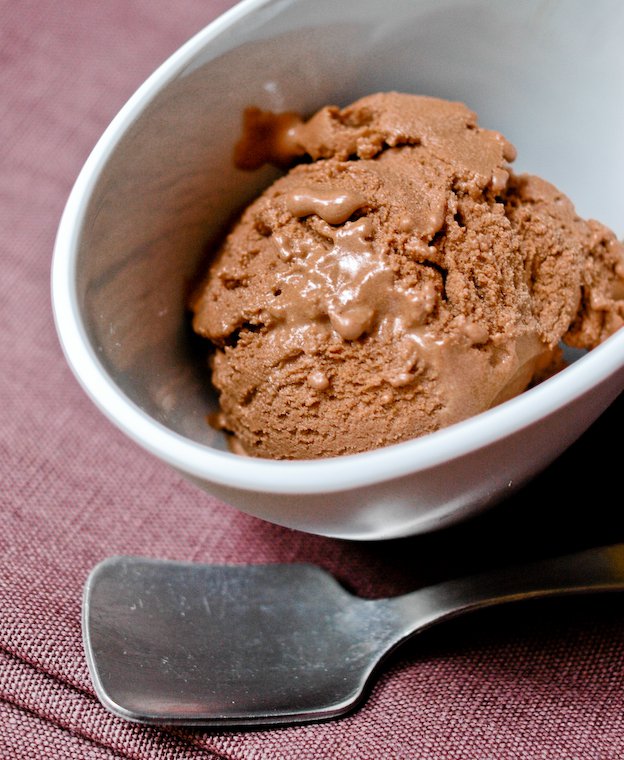 An estimated 62% of my cooking begins with me lying in bed, thinking about some ingredient that needs using, and not being able to sleep because my mind is awhir, trying to devise rewarding ways to do so.

These closed-eye sessions usually yield satisfactory results and, every once in a while, a plain fantastic one. I am counting this ice cream among the latter.

The first taste of my improvised concoction, straight from the paddle of the ice cream maker, gave me pause: could it really have turned out so shockingly well?

The challenge was this: I had a bit of a dairy glut in the fridge, and in particular, a scant half tub of organic crème fraîche that had been open for three or four days, and which I was determined to use before it got any crazy idea like turning rancid or growing a beard. I also had real Greek yogurt* in there, which I know for a fact makes the best glace au yaourt (yogurt ice cream).

Chocolate Frozen Yogurt For The Win!

And because I hadn’t made a chocolate-based frozen treat in a while (not since the dark chocolate sorbet and the nutella ice cream) I decided I’d make a chocolate frozen yogurt. Then I fell asleep.

I had no basic recipe to build upon and merely played it by ear: I melted a few ounces of good dark chocolate, whisked it into the cream, added raw cane sugar, a little cocoa powder, salt and vanilla, added yogurt until the mixture looked and tasted right**, chilled and churned.

The first taste of my improvised concoction, straight from the paddle of the ice cream maker, gave me pause: could it really have turned out so shockingly well? A second sample was collected, and the report was confirmed by the official authorities: I had really made a shockingly good chocolate frozen yogurt, so much so that I felt compelled to twitter it.

Why you must make this chocolate frozen yogurt

Why so elated? Here’s why: the chocolate flavor is ardent enough to satisfy the die-hard cacao worshipper, but the smooth tang of the yogurt makes it pleasing to those who prefer (gasp!) milk chocolate — a rare conciliation, to which the raw sugar adds undertones of malt and caramel. And the cherry on the cake*** is this: once packed into an airtight container and placed in the freezer to set, this frozen yogurt remains blissfully scoopable — for as long as supplies last.

* I buy real, Greek-made Greek yogurt from a Greek deli near me; if you can’t find it, all-natural Greek-style yogurt from the grocery store will do.

** The trick to preparing an ice cream or sorbet without a recipe is to keep in mind that, once the mixture is frozen, the taste buds will perceive it to be a little less sweet, and a little less vividly flavored. So when you’re tasting it at room temperature, you should aim for something that’s a little sweeter and a little more boldly flavored than you’d like the finished product to be.

*** This edible idiom was adopted into the French language as a straightforward translation: la cerise sur le gâteau. 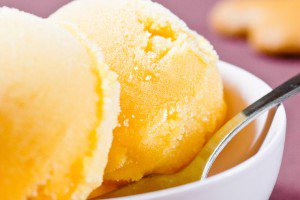