The Rolls Royce of Potatoes 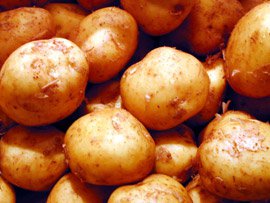 What we have here, ladies and gentlemen, is not just any old potato. No no no. Oh, no. These are Bonnotte potatoes, from the island of Noirmoutier, just South of Brittany. Noirmoutier potatoes, which benefit from copious rains imbued with sea salt, are considered to be the best, and the Bonnotte variety is the cream of the crop.

I bought a kilo of these last week at the Salon Saveurs, for 4.80 €. The guy at the stand, unlike most of the other stand-keepers, was slightly impatient and bordering on the dismissive, but still, I had to ask about the best way to cook them. He said, without so much as a moment’s hesitation : steam them.

Their skin is very thin and edible, and I asked about the cleaning step : should I rinse them under water and brush them gently? He looked at me as if I had just suggested slashing his firstborn’s throat open before we had even had lunch, and he said, “Oh no, god no! If you do that, they’ll take on the taste of water!”. This left me sort of puzzled. Potatoes? Taking on the taste of water? Um, whatever you say, sir, you’re the expert. “You have to rub them together with coarse salt in a clean dishcloth”, he said.

As it turned out, the coarse salt and kitchen towel method proved a very efficient way to spill inordinate amounts of coarse salt onto my kitchen floor, so I quickly reverted to the good old rinse-under-water-and-brush-gently-with-my-cute-potato-shaped-potato-brush-everyone-around-me-covets-so-fiercely-I-have-to-hide-it-in-unlikely-places-when-we-have-guests method, which has never failed me.

I then put the bonnottes in two Asian wicker steaming baskets and over a saucepan filled with salted boiling water. I steamed them for twenty minutes, until a knife inserted in the potatoes met no resistance. We let them cool down a little and ate them as is, no seasoning whatsoever — but if you insist, a little fleur de sel can be nice.

These are, without a doubt, the tastiest, nuttiest, sweetest potatoes I’ve ever had. Fantastic texture, perfect size (two bites), optimal flesh-to-skin ratio : they fully deserve their reputation. They’re so good they could almost be considered a fruit.

And, um, just for the record? They didn’t taste one bit like water. Sheesh. 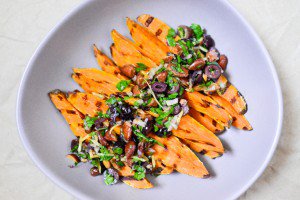 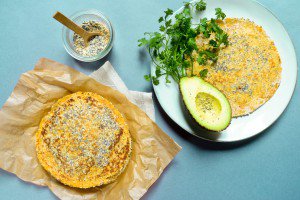 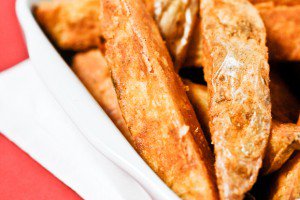 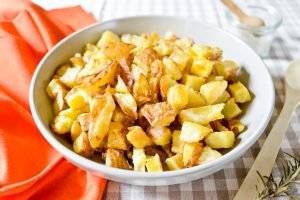 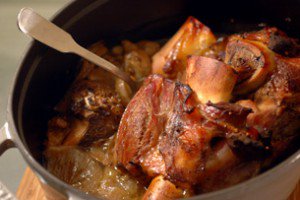