Hello, I'm Clotilde! C&Z is all about fresh, simple, and colorful foods from my Paris kitchen. Learn more »
Books by Clotilde Dusoulier

The French Market Cookbook: Vegetarian Recipes from My Parisian Kitchen 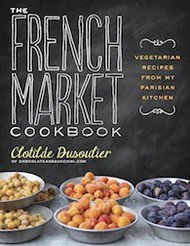 This book celebrates the love story between French cuisine and vegetables.

It is admittedly a challenge to dine out as a vegetarian in France, where meat and fish are treated as the main character of any special-occasion dish, yet the French culinary repertoire is rife with delicious ideas on how to cook vegetables.

Over the past few years, I have transitioned to a more and more plant-based way of eating — for reasons of ethics, environmental concern, and natural inclination — so I’ve had plenty of opportunities to explore unusual and exciting ways to use up my weekly selection of seasonal vegetables.

A book to celebrate the love story between French cuisine and vegetables.

In this new book I am sharing the best of those dishes through 90 seasonal recipes (many of them vegan) and 75 color photographs. Some are personal creations, others are drawn from my research into lesser-known regional cuisines. All are simple and flavorsome, so you can make the most of the time you spend in the kitchen.

My goal, in this book as on the blog, is to teach and inspire, so each of the recipes is meant to leave you not just with a wonderful dish to share with your friends, but also with a trick, a technique, a building block that you can adopt and use elsewhere in your cooking.

I have drawn up a detailed index of all the recipes in the book with the ingredients they contain that some eaters choose/have to avoid (such as gluten, eggs, dairy, nuts, etc.). I make it available to anyone who requests it: get in touch through my contact form and I’ll email the list to you.

[August 2013] "Vibrant photographs throughout highlight the textures, colors, and simplicity of Dusoulier's fare, and will inspire readers to either cook or book a trip to France."

[July-August 2013] A Summer Harvest of Cookbooks.

[July/August 2013] Eggplant and Fresh Herb Tabbouleh recipe featured as "Recipe of the Month."

[Summer 2013] "This clever book is arranged by season and inspires pangs of longing in anyone who has ever gone to a produce market in Paris."

[July 2013] Weeknight Vegetarian: When the green beans are slim, a salad is in the making.

[March 2013] Cookbooks with Veggie Might: The most exciting new cookbooks revel in the delights of plant-based cookery.
Sign up C&Z NEWSLETTER: Get recipes, inspiration, and Paris tips FREE in your inbox!