Hello, I'm Clotilde! C&Z is all about fresh, simple, and colorful foods from my Paris kitchen. Learn more »
Books by Clotilde Dusoulier 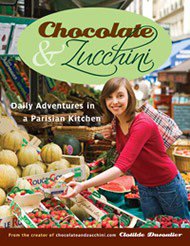 “In her first book, Clotilde Dusoulier provides a glimpse into the life of a young Parisian as she savors all that the city has to offer and shares her cooking philosophy in the form of more than 75 recipes that call for healthy ingredients (such as zucchini) and more indulgent tastes (such as chocolate). The Los Angeles Times calls her recipes ‘simple, charming, and fun.’

An engaging, inspiring look at how young Parisians cook today.

The recipes and accompanying stories can all be found alongside menus for entertaining, as well as tips for throwing cocktail or dinner parties with French flair. Chocolate & Zucchini is the book for anyone who has journeyed to Paris and can still recall the delicious flavors and aromas — or for those of us who only dream about them.”

What they said about the book

“Dusoulier is the Parisian friend we all wish we had. [Her] voice is boisterous, spirited, delightful and entirely forgiving.” — New York Times Magazine

“Dusoulier’s zesty approach to shopping for, cooking, and presenting French food is entirely appealing. Her recipes are inventive rather than eccentric, and her enthusiasm for the pleasures of the table is infectious.” — Gourmet Magazine

[November 2007] Tastemakers ("Our critic's choices for thirteen of the year's best cookbooks"): "Dusoulier's zesty approach to shopping for, cooking, and presenting French food is entirely appealing. [...] Dusoulier's recipes are inventive rather than eccentric, and her enthusiasm for the pleasures of the table is infectious."

[September 2007] Chocolate and zucchini - a match made in France: "As her cookbook [...] and her blog illustrate, [Clotilde Dusoulier] is also an extremely accomplished cook. Not a show-off, but a home cook with a respect for good ingredients, a sense of adventure and a good deal of personal charm."

[August 22, 2007] Sweeten zucchini up: Add chocolate: "The little cookbook reflects the energy and enthusiasm of Dusoulier's Web posts. It's filled with simple recipes written for inexperienced cooks with sophisticated tastes. Many are French classics - think boeuf bourguignon, tarte tatin and quiche oignon - and each is preceded by a charming anecdote."

[August 8, 2007] Celebrate the zuke: "[These recipes are] from the new cookbook Chocolate & Zucchini, written by the young Parisian Clotilde Dusoulier, whose blog brought her legions of fans and a cookbook contract."

[July 2007] Consuming reads: "[...] the author of renowned food blog is one of the hottest new talents on the culinary scene. Her first cookbook is a fresh and idiosyncratic take on her intimate foodie memories, plus 70 new recipes that you won't find on the blog."

[May 2007] Notes from a Paris foodie: "Chocolate & Zucchini offers many new recipes that showcase Dusoulier's fresh, creative, market-driven approach to cooking as well as a fresh helping of her unique prose. Dusoulier's English is fluent, both in print and in conversation, and yet there is something - an unorthodox word choice, an undercurrent of arch humor, an appealing lack of irony - that suggests an outsider's perspective."

[May 2007] Food Chain: "Her recipes emphasize the fresh and the easily obtainable, seasonal cooking at its best. [...] This is no imperious Cordon Bleu chef issuing cooking edicts; this is a friend clutching our hand as we share in the marvels of the culinary universe."

[May 2007] Appealing cookbook is welcome stage in young foodie's growth.

[May 2007] I love Parisian recipes in the springtime.

[April 2007] "Dusoulier has contagious enthusiasm for her local Montmartre markets. Reading "Chocolate and Zucchini" is like going on a slightly frenetic shopping spree -- in other words, irresistible. Dusoulier is the Parisian friend we all wish we had. [...] Dusoulier's voice is boisterous, spirited, delightful and entirely forgiving."

[April 2007] "Dusoulier's charm lies in her culinary curiosity and enthusiasm, and she deftly conveys both through 75-plus recipes and narrative commentary."
Sign up C&Z NEWSLETTER: Get recipes, inspiration, and Paris tips FREE in your inbox!